i hate that days and weeks and months keep flying by and i’ve neglected to document 90% of it.

summer is in full swing here in charleston, and our weekends, while they’re exhausting, keep getting more fun.

this summer has been jam packed so far, and every single weekend we’ve had SOMETHING going on, something to look forward to. first it was merlefest. then carolina rebellion. then brett’s brother and girlfriend stayed with us. then we went to LA for 4 days. last weekend was a girls’ night out in mount pleasant for kelsey’s birthday party. this weekend was no different.

our friend brandon and his new wife emmaly got married on saturday in john’s island–a 45ish minute drive from our house. it was at a place called tucker’s pond, and it was absolutely beautiful. the ceremony and most of the reception were outside–garden party themed, so pretty, and the ceremony was just awesome. it was a bit hot but the shade and breeze and ice cold homebrewed beers made it perfect. we went inside for lunch, catered by home team BBQ. OMG, so good. i could eat there every day. 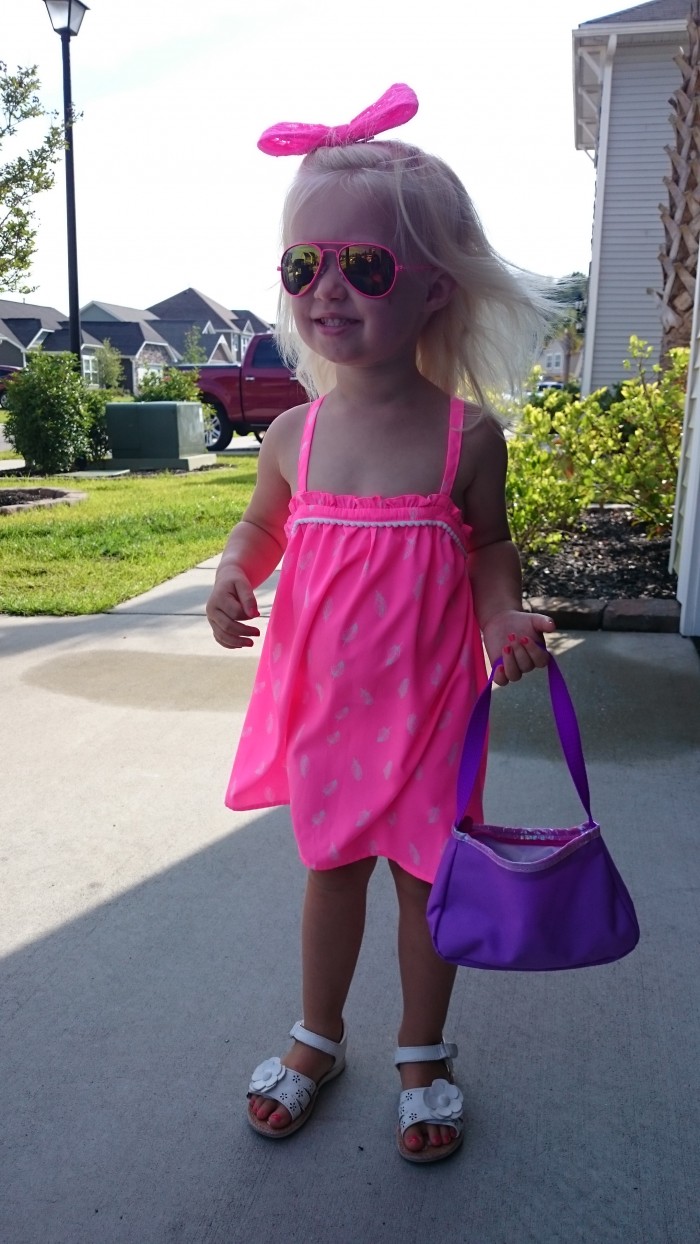 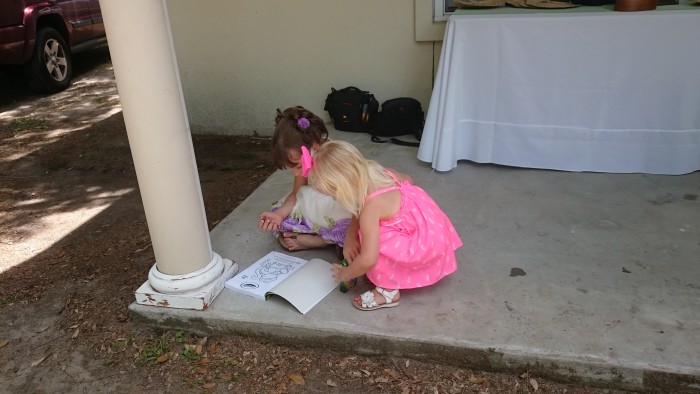 we had caylin with us, and there was only 1 other little girl there for her to play with. she was 6, so a bit older, and wanted to dance and color. caylin was more interested in eating ice cubes out of the beer tubs, digging in the dirt, and “fishing” in the pond (with sticks), and she definitely wanted no part of sitting still. even to eat lunch. she was literally crawling all over me while i finished HER plate of food. crazy child. 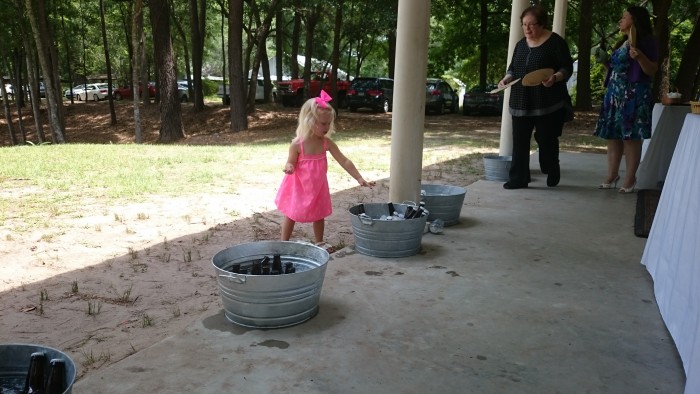 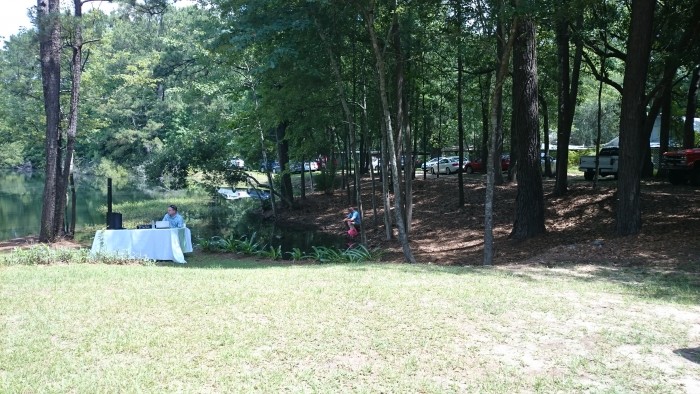 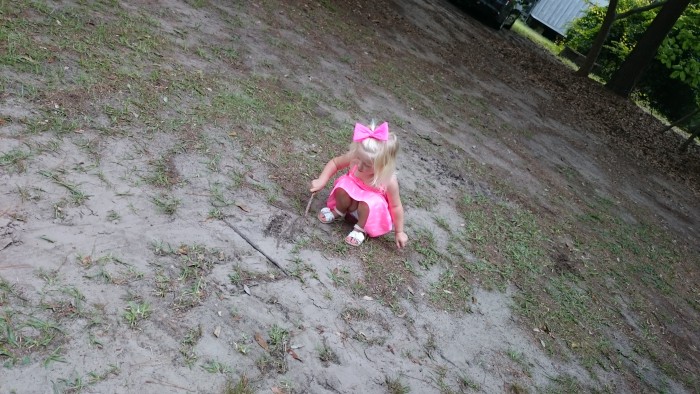 that being said, we didn’t stay the entire time. i think we left around 2, so we stayed a little over 3 hours i think. long enough to hang out and catch up with several former coworkers who have since moved many states away, so it was really nice to see everyone. hopefully we will be seeing many of them again soon in vegas for DEF CON! 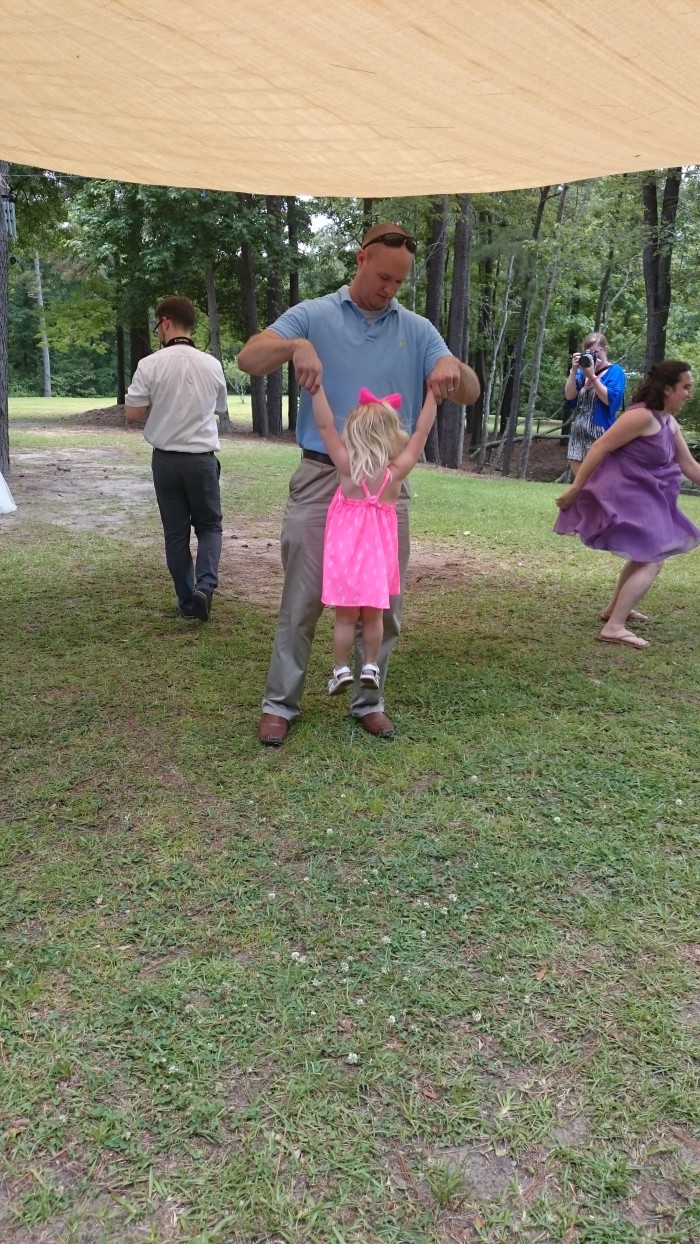 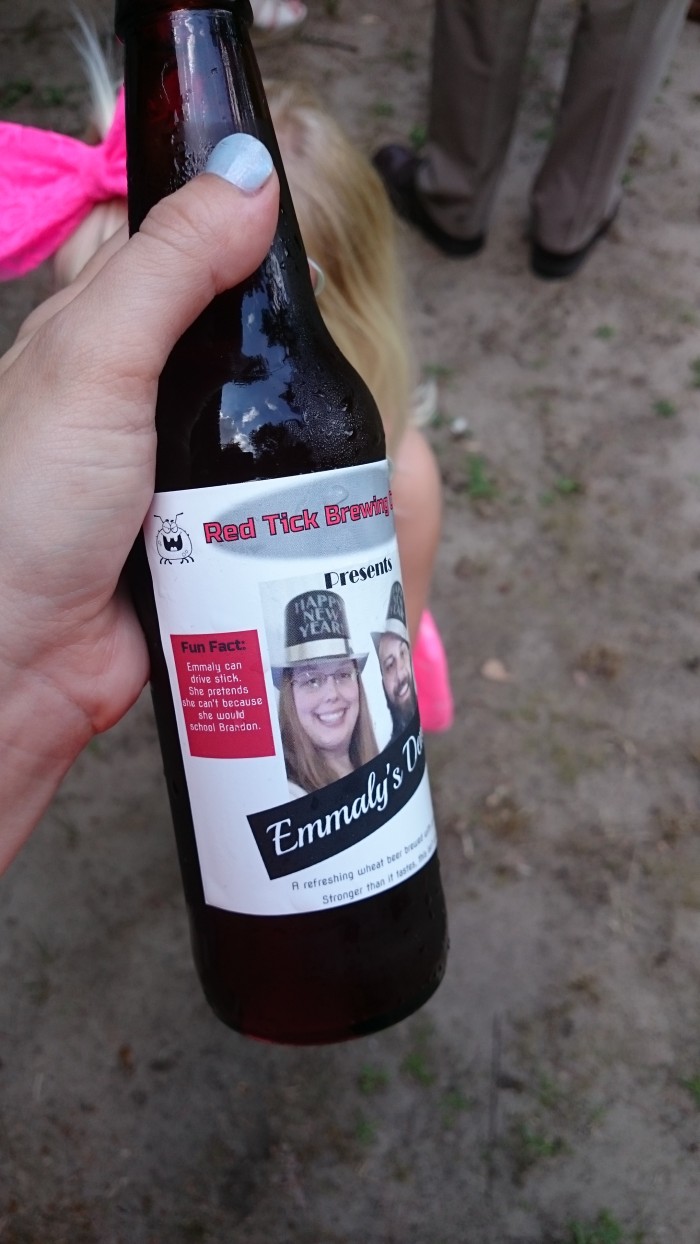 we came home and caylin and i played outside with ashley/madi/reagan for the remainder of the afternoon/evening while brett napped. he told the guys he’d go back out there that night and hang out with them–it’s not often that he gets to go have bro nights, since lots of them have either left SC and/or live hours away. 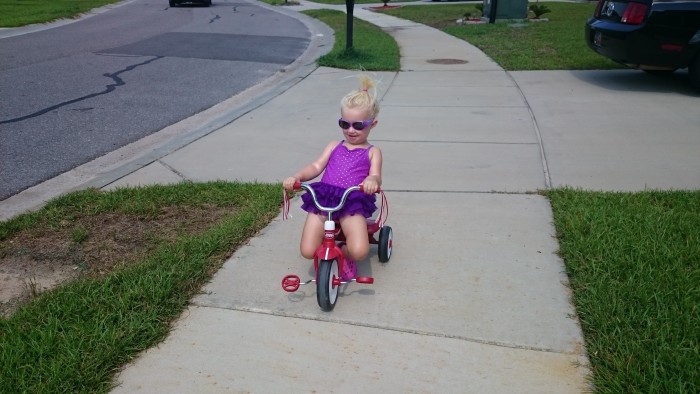 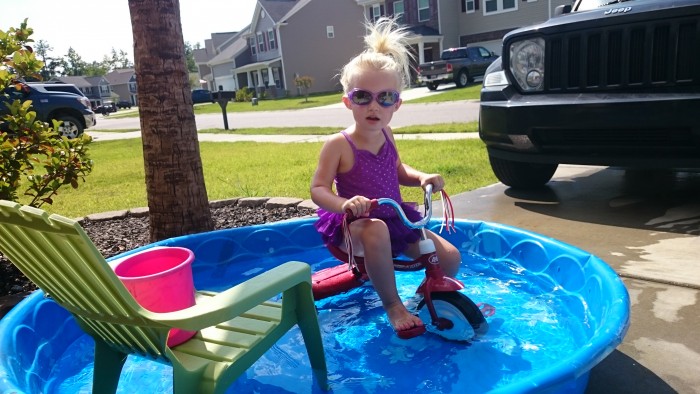 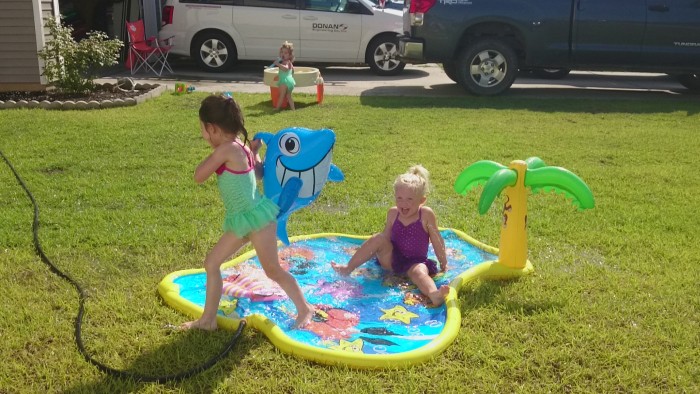 brett left and girls night began. caylin and i got cleaned up and put on the comfiest clothes we could find. she likes getting “comfy cozy!” and what’s cozier than watching cartoons and eating pizza on the couch while covered in blankets? so that’s exactly what we did. 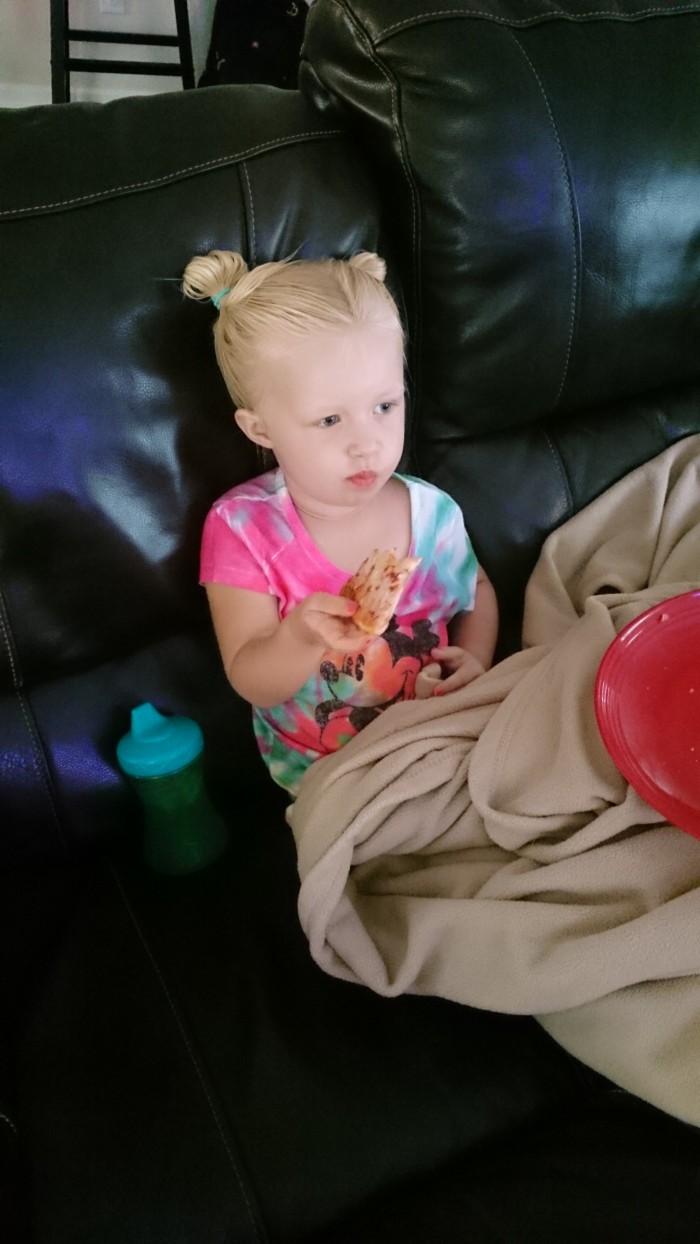 yesterday was basically nothing but play.

woke up with caylin and fell in and out of sleep for a couple hours while she played, sometimes on top of us. it’s amazing what you can sleep through when you are truly that tired. we finally got up and went downstairs, and i cooked some sausage gravy. caylin and i got our bathing suits on, hopped on the bike, and i carted her down to the pool. 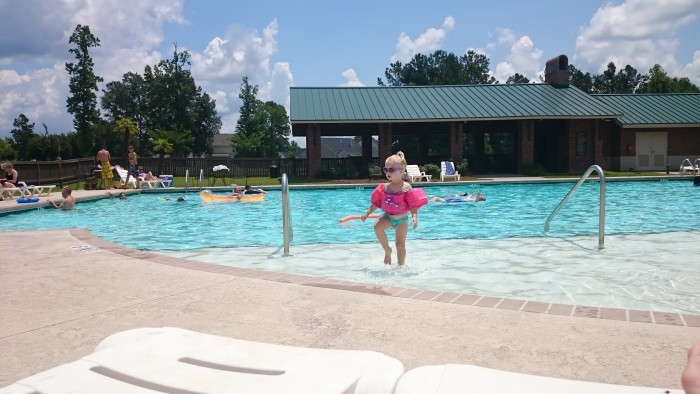 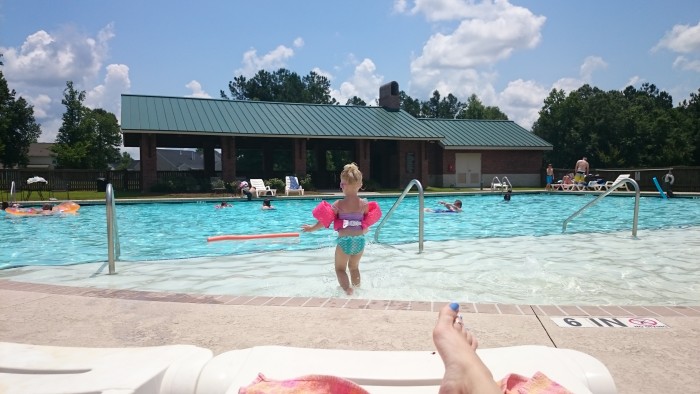 we played for probably and hour and a half-ish. she only slept 8 hours the night before (instead of the usual 10-11), so i knew she was going to be wiped. we biked back and we split a ham sandwich and fruit for lunch. i put her down for a nap and got a workout in, did some laundry, and relaxed a little bit.

i find it incredibly hard to sit still lately. i don’t know what’s wrong with me. relaxing didn’t last long.

i woke caylin up around 4 because ashley said madi wanted to play and go to the pool. so we got BACK in our bathing suits, and i biked us BACK to the pool. this time madi rode in the cart with caylin, and i completely forgot about how much heavier the cart feels with 2 kids instead of 1. holy shit, that ride felt long. 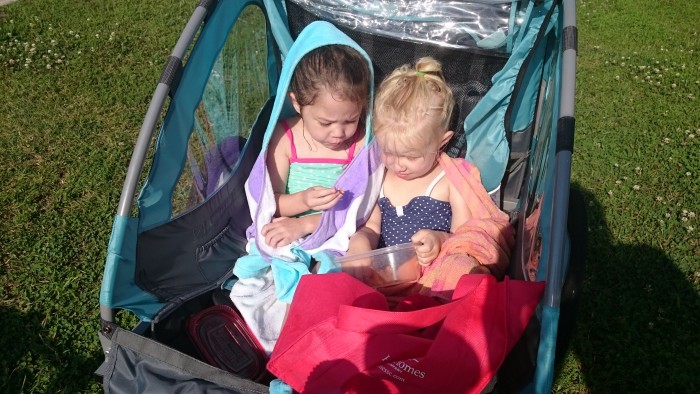 there was a graduation party going on, so it was packed, and SO loud. DJ, drinks, the whole deal. but caylin was loving it and has recently started actually trying to swim sans swimmies. she is so proud of herself. no more fear of going underwater, but she is still struggling with the concept of keeping her mouth shut. too busy giggling and screaming, which i guess is a good problem to have.

we threw them around for about an hour, and then they started getting hungry. like a pack of animals devouring the bucket of goldfish i brought. it was ridiculous to watch. 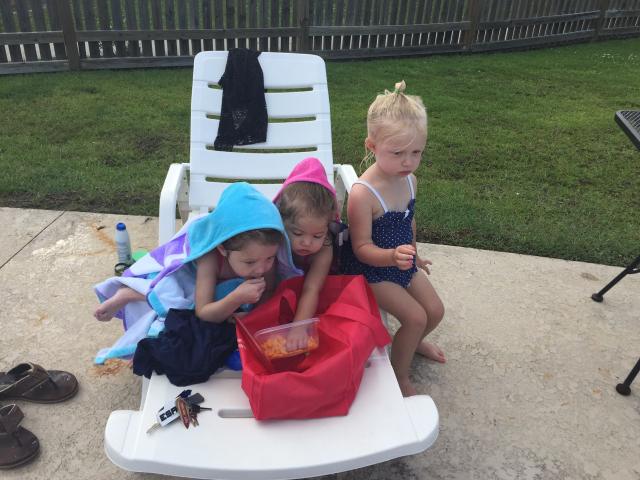 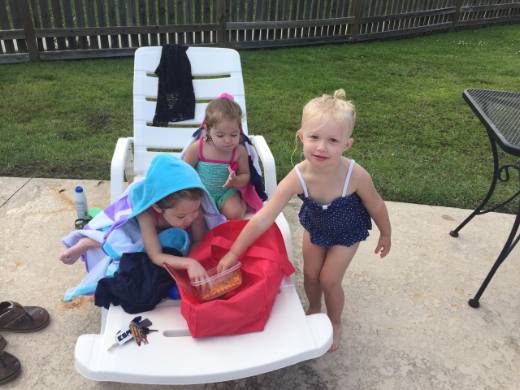 so we biked back home (downhill-ish was better, omg), and they played in the driveway for another half hour while us moms cooked dinner.

we spent so much time outside this weekend, and i didn’t touch my computer once. it felt great. i could get used to that :)

last week was my mom’s birthday, and this past weekend, i…

i can’t believe my baby turns 3 in august :( disney world…