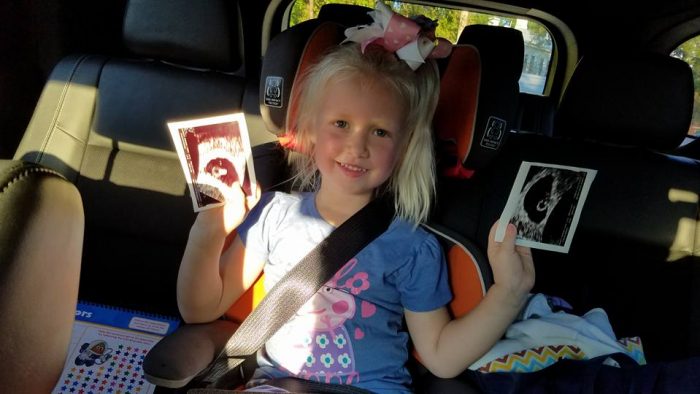 this post is way late, but i’ve been tired and distracted.

until recently, we (and by we, i mean i. brett has always wanted > 1) decided to stick with 1 kid. 1) kids are expensive. 2) it’s hard enough juggling our 2 careers and 1 child. 3) i already feel like i don’t get to spend as much time as i want to with her, especially given our commutes and crappy traffic. on a normal week, seeing her for maybe an hour in the morning and from 6-9 at night just doesn’t seem like enough. if only the weekends were 3 days. lastly, 4) i didn’t want to go through pregnancy again. it’s just… not fun. at all. uncomfortable. huge. exhausting. painful. and i’m in the best shape of my life after crossfitting 5-6 times a week for the past year and a half or so–it’s been life changing for me. it would feel like starting over from square one. the last bit: selfish reasons, sure. but having a baby is a huge ordeal. physically and mentally.

aaand then caylin turned 4. she was at school and i was going through her baby stuff, trying to make sense of one of our closets, consolidate all her old things, figure out what was going to goodwill or to other family/friends.

tangent: i really want to hire someone to just come in and organize ALL THE THINGS, because the closets in this house give me anxiety just looking at them.

ANYWAY, i got really sad. i couldn’t bear to part with her things yet. i miss her being tiny. of course, she’s still little and she’s still my baby and i love her more than i thought was humanly possible, but i miss having a baby around. i couldn’t (and still can’t) believe these thoughts were actually happening.

for months, caylin kept randomly mentioning how she wanted a brother, or just a baby in general, but most of the time she said brother. and i knew brett wanted another kid.

something snapped in me. i threw all my reasoning aside, and i told him on the way to pick her up that afternoon that i wanted another one.

the look on his face said it all.

fast forward about 6 weeks to the week of hurricane matthew. didn’t want to chance being stuck in the house during a hurricane without power and a stir crazy child, so we evacuated. we stayed at my dad and stepmom’s house in NC. turns out, you can go stir crazy even with power. we were all suffering from a bit of cabin fever due to the constant rain. we took caylin to the greensboro science center for a day, and on the way back i bought some more pregnancy tests. at this point i think i’d already gone through 4 boxes of them but i figured i’d try again.

i KNEW something was up. i KNEW my hormones were a wreck. i felt like i could cry or punch someone in the throat at any given moment for weeks at that point. my skin was a wreck. i just felt terrible.

so, got back to dad’s, took one. no dice. waited until a couple days later. took one, no dice. SO FRUSTRATING.

and then, because i’m weird, i went and pulled it out of the trash can an hour later just to be sure. LO AND BEHOLD, 2 PINK LINES. oh my god. brett had gone up to the YMCA to work out, so i texted him. he came back almost immediately, and spilled the beans to my parents and caylin while we were all sitting in the living room. let’s just say, the cabin fever was now at bay. i felt this overwhelming sense of peace hit me like a wall–the crazy hormones and mood swings finally had a reason, and i felt like a new woman. tears of joy, the flood gates opened.

i don’t think it hit caylin right away, but dad and christine were thrilled.

so, we assumed i was like 6 weeks pregnant at that point, given the timing of it all. i made an appointment to see the doctor like a week and a half after we got back. i’d be 8-ish weeks by then.

brett had just done his radiation treatment (since he had thyroid cancer 2 years ago, they wanted to do another round), so he couldn’t go to the doctor with me. he stayed in a hotel for the few days he was quarantined. i went to the OB alone, which i didn’t mind. the first ultrasound is the awkward internal one and that isn’t all that fun for anyone. i didn’t brace myself for anything crazy, just figured it would be caylin-round-2.

and BOY was i wrong. my doctor’s head was blocking the TV screen behind her, so i didn’t see anything right away. she just said, “well. i am seeing 2 here. and you’re definitely not 8 weeks, it’s more like 5.” my immediate reaction was “WHAT?” and “are… are you sure? what is that? so, what are the chances that that’s right?” followed by a lot more what’s and how’s and ohmygod’s. her assistant (who looked like she might be my age, or younger) looked about as shocked as i was.

turns out, twins make you produce more hormones, so we found out really early. the doctor said that things could always change, because it was so early. sometimes both don’t make it, but these were fraternal and both had their own everything, so, it looked like we’d be having 2 little ones.

she sat with me for a while to address all of my questions and (very real) fears. this woman is awesome, by the way. when we first had caylin, we were still living in our townhouse in west ashley, about 3-4 miles from this doctor’s office. 2 miles from the hospital. could not be more convenient. then we moved, and now we live way out in podunk. my doctor is now 45 minutes away. i decided to stick with her, though, because she is just that awesome. it’s worth the drive.

i sat in stunned silence for a bit. all i could think of was 2 more 529 plans. 2 more daycare payments. sooo much $$$ on baby formula. 4 more car seats (we have 2 infant seats now, but then there’s mom’s car, brett’s truck). a new car. double the diapers, that we were so happy to see disappear 2 years ago. fitting all of these things into the budget. sleeping arrangements. sleeping, period.

she assured me that we would be fine–we pretty much had a perfect pregnancy the first time. i’m in good health, better than i was the first time. the chances of this going just as smoothly are in our favor. the rest will figure itself out.

i called brett when i left. he was driving, so i told him he might want to pull over. i sent him a photo of the ultrasound and told him to count the black dots. and he freaked. iii mean freaked. part of me was glad i went to the appointment alone, because it would have been a lot louder had he actually been there. 2. babies. TWO BABIES. we tried to come to terms with it but, turns out that takes a while. i think we’ll be coming to terms with it up until the day i deliver. i sent the same photo to my mom and dad, and they freaked, too.

the last month has been smooth sailing for the most part. zero morning sickness, unlike last time. not showing yet. i’m still crossfitting 5-6 days a week. the not drinking part has made me feel SO much better. i feel great, minus the overwhelming amount of tired, the hormones (seem to be leveling out a little, my face is no longer a disaster), and the fact that i’m always hungry. i have never been this tired in my life. i’m finding it hard to stay up until 1030-11 lately. this coming from a night owl. can’t imagine what it will feel like in a few months.

this is all so surreal. and ridiculous. i don’t know how we’re going to figure out life with 3 kids, but we’ll figure it out. one day at a time. meanwhile, caylin has it all figured out and says she’s having a brother and a sister. she’s going to be an amazing big sister. i am completely terrified, yes. but really excited for all the happiness to come.

hi :) i'm whitney. i'm a security architect, engineer, "developer", and automation/devops geek, whose hobbies consist of the above, crossfit, sweatpants, "art", and whiskey.

ohh, i am so… so glad that the first trimester is basically…

Our Child Is Insane, Has It Been 4 Years Already?

in a couple weeks, caylin turns 4. where has the time gone?…