i spent the last day and a half in cedar rapids, iowa. somewhere i can honestly say i never saw myself visiting. it’s very flat. and very tiny. and i loved it.

except this was like… THE weirdest work trip i’ve ever been on. which doesn’t say much since i don’t really travel for work that often. anyway. it was weird.

for starters, my flight didn’t even get ticketed when i made my travel plans, so i bought tickets 45 minutes before take-off. not exactly the best start to the trip.

fast forward to actually landing in iowa at 9PM, and going to get my rental car. which was a chevy aveo. i had no idea what an aveo was until tuesday night, and now i know i will do everything in my power to never drive one again.

maybe i’m spoiled with my saturn, but… this particular aveo did not have power seats, windows, mirrors, LOCKS (i forgot how much of a pain in the ass that used to be!)… and even better–no CRUISE CONTROL! after my 3 speeding tickets, i LIVE by my cruise control. it is always on. unless i’m in charleston traffic, in which case, it would get me killed. it DID, however, have an auxiliary port and this neat little feature where the radio doesn’t turn off until you get out of the car. do not ask how long it took me to figure that out. 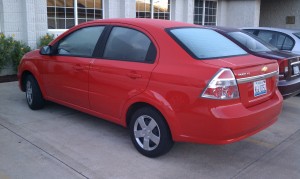 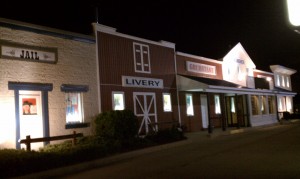 the whole place was western themed.

EXCEPT for the second bar (the first one was decked out in cowboy decor), which required going up to the 4th floor via the elevator, walking to the end of a long hallway, walking across 2 catwalks, down a glowing spiral staircase (metal spiral staircase, COVERED in christmas lights, not a good idea to throw at drunk people leaving a bar), and into the bar. which is next to the pool (also, WHY next to the bar?!). which was next to the continental breakfast that consisted of mini donuts, brown bananas, watermelon, and corn flakes.

i got lost on the way back and ended up outside near the dumpsters.

then i went to rockwell collins. which is where our meeting was. i thought it was going to take me a while to get there, but as it turns out i was .3 miles from the building, so i sat in the parking lot for 45 minutes and asked random people how to get to the RIGHT building. because the first 3 i tried were the WRONG building.

and then i learned that people don’t like to be prompted while getting out of their car at 7:30 in the morning. turns out one guy didn’t see me sitting there when he parked, so when i rolled down my window and yelled HEY! he suddenly thought god was talking to him and i thought he was going to pee his pants. he thanked me for reminding him that he was alive, and went on his way. but not before pointing me in the direction of another WRONG building.

fast forward to the meeting… it was long. but informative. i actually enjoyed it despite it lasting for 9 hours. we even had a working lunch.

THIS, however, was my breakfast. followed by a 5-hour energy. i felt fantastic. and twitchy. 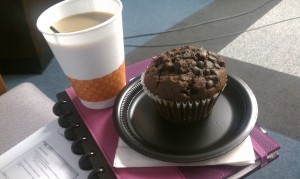 fast forward to lunch, where the boxed lunches they provided us had different desserts in them. mine had an entire hershey bar. and then they tried to feed us chocolate frosted brownies. i am so proud of myself for not eating EITHER of them! my heart may have stopped.

fast forward to dinner, at an italian restaurant called biaggi’s, which was AMAZING. i ordered a filet mignon with garlic mashed potatoes and it was… perfect. and so were my whiskey sours. i tried ordering chocolate gelato for dessert, but i guess the waitress heard raspberry sorbet instead, because that’s what she brought me. and i was very surprised when i bit into chocolate ice cream that tasted strangely like a fruit pop. i ate it anyway.

i drove back to the hotel because i was waiting on my cousin (who just happens to live in cedar rapids AND works at rockwell collins, strange coincidence) to pick me up.

and i was walking back to my room and was forced to walk down this hallway. again. my room was the LAST one. this hallway terrified me every time i walked down it. it was completely silent. i kept expecting to turn and see a strange figure standing behind me. it gave me neck chills every time.

my cousin finally showed up and took me to this place called The Spy Bar (the picture is dark because my phone was about to die and couldn’t flash, and i suppose it looks cooler being a “spy” bar and all, because dark == spy-ish). i’m guessing this is where mostly hispanic/latino/everything-but-white people go (my cousin is included in that group, she’s mixed). i was largely outnumbered… something else i didn’t expect in iowa. it is very diversified. and diversified people can seriously dance.

so i, too, learned to dance. i learned to salsa. and merengue. and bachata. and i even learned how to SAY them correctly. and i DIDN’T SUCK. and i had so much fun, though it did take some coaxing (special thanks to Jack Daniels), and at the end of the night my cowboy boots had wrecked my feet (yes, i went salsa dancing in cowboy boots), but it was so worth it.

UNTIL this morning. when i realized 2 and a half hours is not enough sleep to NOT sleep through an alarm clock that i had strategically placed under my face. i woke up at 6AM for a 7:05 flight. i washed my face and did my make-up in record time (read: 4 MINUTES!!!). threw on a hoodie over my dress and boots, threw everything else in my suitcase, and hauled ass to the airport.

then i went in the wrong entrance. which wasn’t an entrance. and then i finally found the rental car return and got rid of my god forsaken aveo.

the aveo that still had my suitcase in the back, but i already RAN (not jogged, not speed-walked, FREAKING RAN) to the terminal. realized i left my things. RAN back to the car. didn’t bother to lock it this time. RAN back to the terminal. couldn’t figure out the key drawer at the return so i left the keys on some dude’s desk. RAN to the ticket counter, and the machine told me it was too late to check in for my flight (it was 6:38). i fought back my tears (and an asthma attack, thank you Albuterol) and found some nice lady who begrudgingly accepted my card and gave me my tickets. i RAN to security, and i will never wear a hoodie through security again because i actually got frisked today. by an old woman wearing rubber gloves. it was horrible. and it took longer than it should have. and i was uncomfortable.

i RAN to the gate, just in time to take off. i had made it. i caught a glimpse of myself in a reflection and quickly realized how ridiculous i looked–frilly dress, XXL appalachian state hoodie, cowboy boots, bed head… lovely. and then i decided i really don’t care and i passed out on the plane. and on the next plane. and almost on the way to get my car when brett picked me up.

and despite the ridiculousness of the last 36 hours, i can’t wait to go back to iowa. but next time i will not stay at the best western, and next time i will get a better alarm clock (or a later flight).

a few nights ago, i had a dream that brett and i…

That *IS* My Nightmare