i have probably made buffalo chicken pizza at least a dozen times in the last few months. so much so that brett got sick of eating it and i had the whole thing to myself. i was totally okay with that. 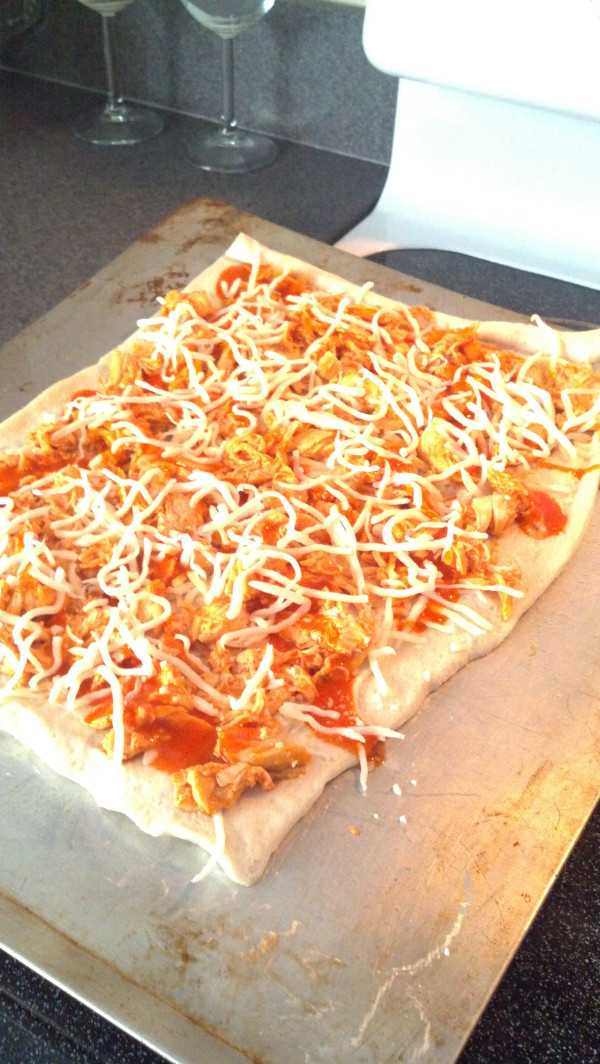 if you like wings or buffalo chicken sandwiches, you’ll probably like this pizza. oh, and the picture is the pizza uncooked. i was too busy stuffing my face after this was taken.

(this is me procrastinating on other websites i should be working on, by the way. i needed a break and this wine is tasty.)

i do it the fun way with pillsbury pizza dough. this stuff is awesome and easy and awesomely easy.

first, spray down a cookie sheet with no stick spray. preheat the oven to 425F. unroll the dough and make it whatever shape you want. i wanted a circle, but it comes in a rectangle and after fighting with it for long enough trying to make it a circle, the rectangle won.

i usually keep chicken breast tenderloins thawed out in the fridge the day before i make this so i don’t have to defrost anything. this is because i’m really impatient.

so now you have chicken. boil the chicken for a while until it’s fully cooked. i usually just let it go and forget about it for a while. i don’t really chop the chicken as much as i tear it apart. kind of like pulled pork/barbecue, but with chicken.

then i either take texas pete hot sauce and mix it with melted butter, or i just buy buffalo wing sauce. again, lazy. whatever you have at hand, throw the chicken in but don’t get too much extra sauce because this makes the pizza turn to mush.

bake for 18-20 minutes, cut, drizzle with ranch dressing, and devour!

i find that this goes especially well with a cold glass of chocolate milk. i don’t know why, but it’s freaking amazing.

One Month Until The Big Day!

and on my wedding day, i’ll be wearing this: the last…