it was so much easier to plan meals for the week before we had caylin. and that is ENTIRELY because it is SO hard to cook even a barely-complicated dinner with a baby who constantly wants to play (which is awesome, no doubt–not complaining, i’m explaining). running around, screaming because she wants puffs. i’m trying to boil water. she needs formula because she just shoved 12 puffs in her mouth. oven timer is going off. pasta needs to be stirred. sauce is boiling/baking to a crisp in a frying pan. roux = roux-INED. she’s pulling febreeze things out of the walls. loki’s foot got run over 12 times with caylin’s walker. take her out of it so she can roam and now she’s going for the dog food bowl. ground beef == BURNT. it is… hectic.

so, needless to say, the depth of my meal planning lately has been pretty minimal. quick and easy is where it’s at these days. caylin wants food… and she freaking demands it. i can hold her off for about 5 minutes with a plate of veggies (loves them). and i can distract her with puffs while i’m stirring things. i get about 5 minutes of play time when i reintroduce her to the tupperware cabinet. i’m running out of ideas, though. and i’ve given up.

we’ve been eating like the same 3-4 meals with a slight variation on a rotation every night lately. i simply can’t keep up.

thing is, now that i have a family to cook for, i think about how i meticulously, RIDICULOUSLY, and obsessively obsessed i was over meal planning when brett and i lived together before we had caylin. we had crazy awesome dinners almost every night.

ARE YOU KIDDING ME?

we are 20 somethings. we had no baby at the time. yes, we were married. but does that mean you have to play house and make dinner every night?

that was rhetorical. NO. IT. DOES. NOT.

on the one hand, i learned to cook a lot of things. which is awesome. but… this adds to one of my biggest regrets. i know you should “have no regrets”, but life slaps you in the face once in a while. wake up call. mid 20’s crisis. postpartum panic. whatever you want to call it.

at the time, i was thrilled to be sweatpantsing it with the love of my life (that IS a verb, yes), cooking dinner, drunk baking, watching our TV shows every night. don’t get me wrong–it WAS awesome. it IS awesome. but… all the time i actually stressed over dinner? all of the time i stressed over meal planning? over a grocery budget? it was so worthless. so stupid. he and i both would’ve been happy with sandwiches. or ramen. or frozen pizza. or freaking spaghetti every night. i don’t know what i was thinking.

all i’m thinking now is… you should’ve gone out to dinner those nights you felt like not giving a shit. or just said screw it and gone out dancing for the night (what i would give to go out dancing). or even the movies. or just driven to the beach for the night. or had food delivered WAY more often (especially since now we live in a place where there are like MAYBE 2 places that even deliver here). anything… besides sit at home and cook and be a nerd.

so. many. awesome. replacements. it blows my mind.

babies put everything in perspective. and that perspective is… you have no idea how much free time you actually had. live it up. 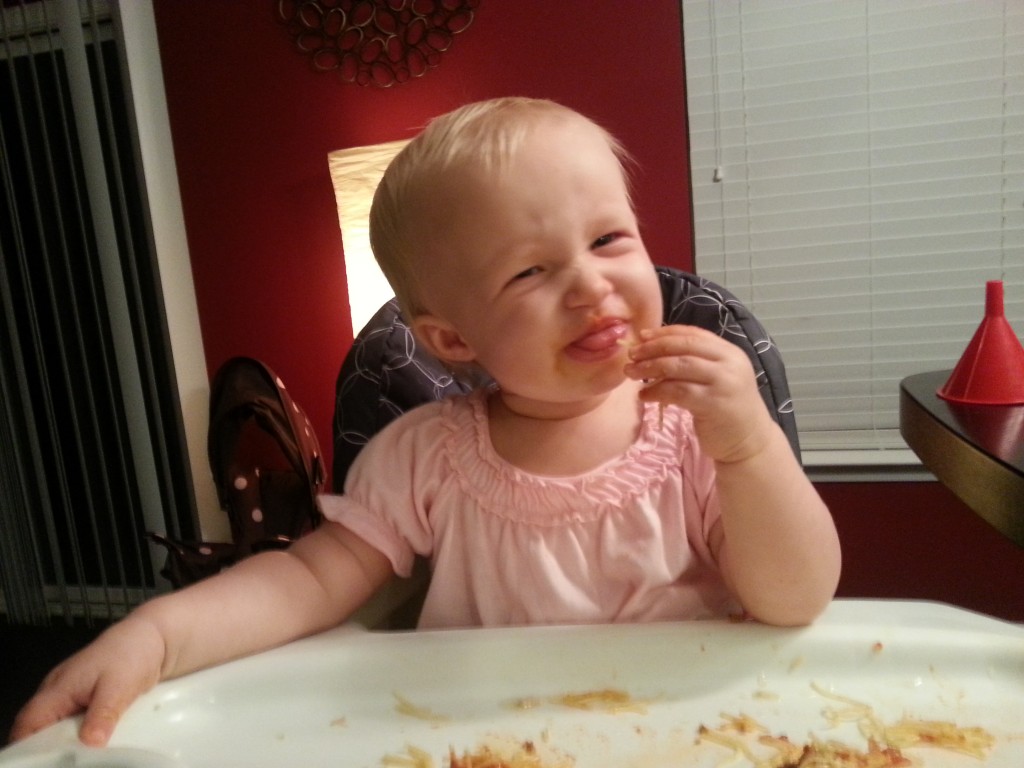 that said, i wouldn’t change anything, because i wouldn’t be where i am now with the most badass little 1 year old on the planet.

please god, slow down. everything. it feels like ever since we found…