i finally got another tattoo today.

i’ve had this craving for a long time now. i get them from time to time. i get the itch to get another piercing or tattoo, but i’m running out of piercing options, and i don’t want to get any “big” tattoos. not yet, anyway. i also don’t have any tattoo-worthy ideas. god, i wish i could draw.

the last time i had anything done was 2009, and that was piercing #18. i think. an awesome thing about boone (out of like a million things)? my favorite bar was a block away from a tattoo/piercing place. both were less than a block away from the building that ALL of my classes were in. oh, how i miss college. anyway, i showed up at brett’s with another bar in my ear and he was all, “WTF”.

similar situation. i was in training the other day when the craving hit again. it had actually been in the back of my mind for a few weeks now. i IMed brett and told him i wanted to get another tattoo. my phone rang immediately, lol. he’s so weird about this stuff. we had a conversation about it over dinner tonight, and i still don’t understand his position on body modification. he says i “don’t need anymore.” i know i don’t NEED them. no one NEEDS them. but i love it. every hole and every mark is a memory.

my dad has always hated my cravings, as well. when i was younger, i made a deal with him that i wouldn’t get any tattoos until i was 21, and i wouldn’t get any piercings unless they were OK-ed by him. this worked out, for the most part. he OK-ed quite a few. and then i went to college, and all hell broke loose. not completely, but i did get my first tattoo at 19 (my name in binary on my lower back), which was outside the scope of our deal. i kept it hidden for a while until he found out (or at least, to my knowledge). i got my second at 20 (my ladybug), and my third (my weird skull with fangs) about a month before my 21st birthday, the day before i left for scandinavia. so, technically, all of them were against our deal. to this day, i feel guilty for lying to my dad.

i do get where he was coming from, though. the older you get, the more you realize what “permanent” means. lucky for me, i still love all my tattoos. they all hold a special meaning for me.

my name in binary? i got it the day my best friend grainger came home from iraq. we made a deal while he was gone that we’d get inked together. my best friend becky (one of my bridesmaids!) came with us and held my hand the whole time. i couldn’t ask for a better first tattoo experience. 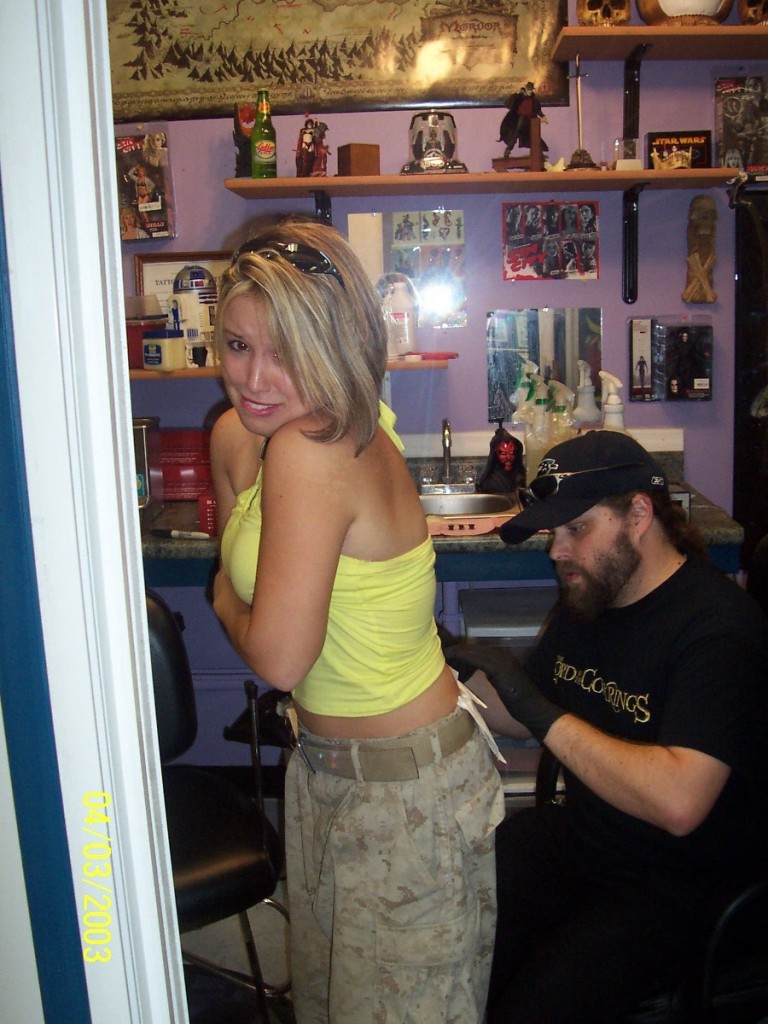 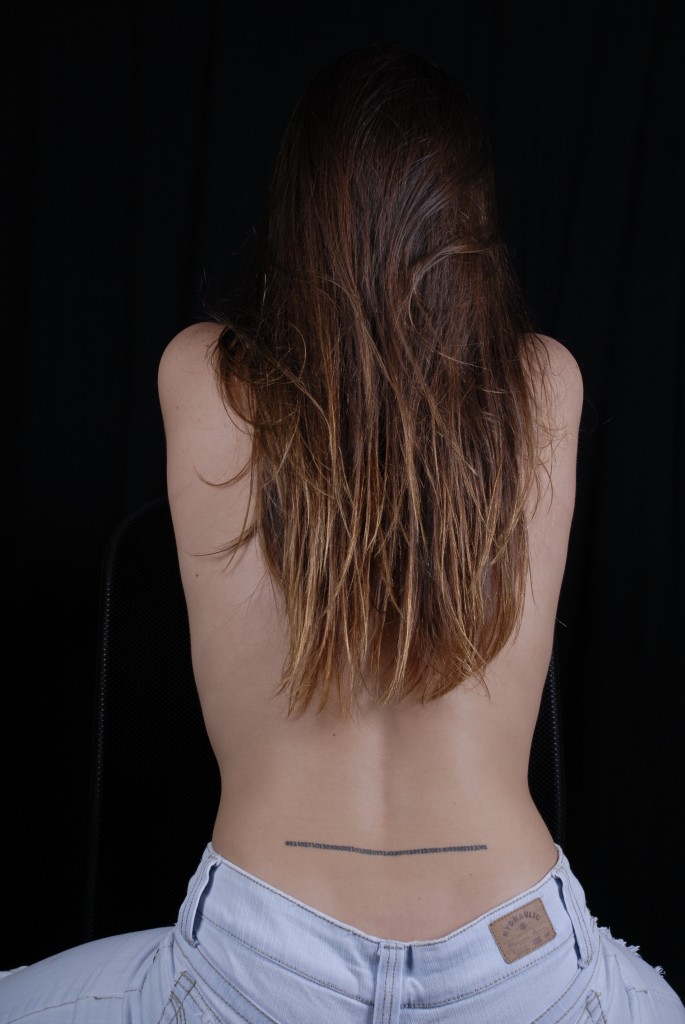 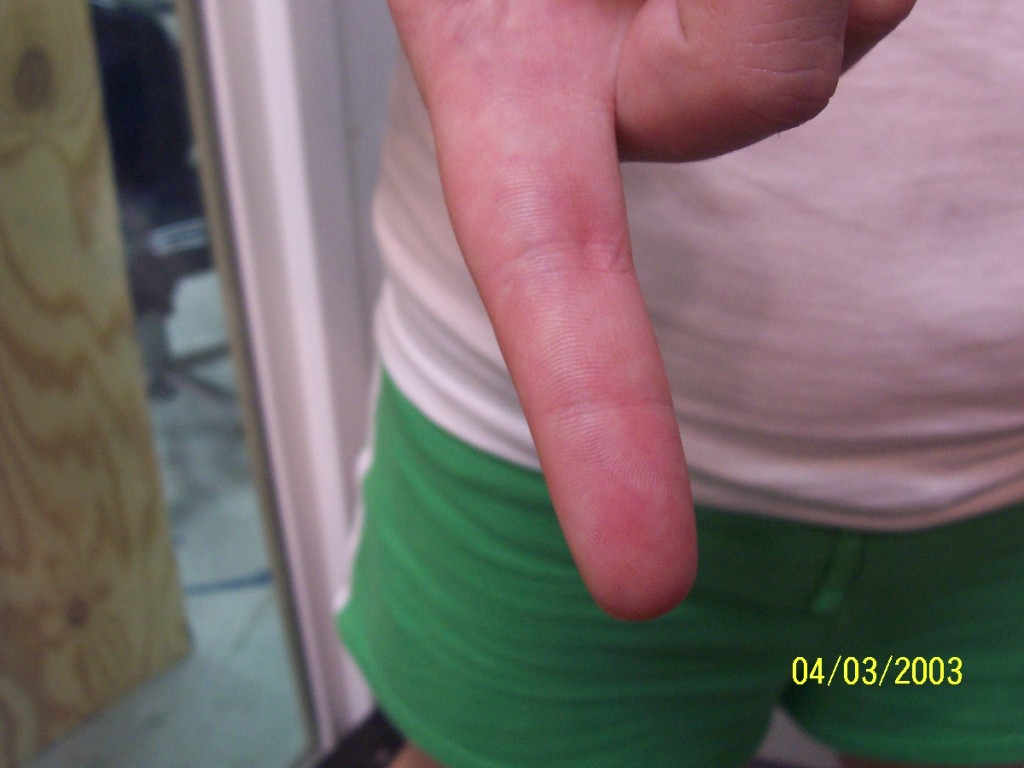 that is becky’s finger after i squeezed the shit out of it. ignore the dates–my camera screen was broken from so many drops, so i couldn’t fix it after a while.

my ladybug was a little more spontaneous. my favorite movie of all time is under the tuscan sun. yes, it’s a chick flick. but when i was going through a bit of a rough bout with depression, coupled with boy drama, my mom made me watch it. now that i’m older, i understand it was her attempt to make me realize that she had been there, done that, and was trying to comfort me (and snap me out of it). at the time, it felt like nagging. but i watched it anyway. i don’t want to sound stupid by saying it changed my life, but… it changed my life. not immediately, but down the road.

i felt closer to my mom (despite me trying my hardest not to show it). when i was living alone in my studio apartment in 2006, and was horribly depressed to the point where i flunked out a semester, ate spaghetti-o’s and easy-mac for like 2 months, stopped going to work, never took off my sweatpants, and didn’t leave the house, i also didn’t have cable. this was the only movie i played. i let it play on repeat for weeks. it wasn’t because it was a filmography masterpiece (it isn’t)–it was because it let me know my mom was worrying about me. and that was comforting, even from 100 miles away.

there’s a quote in the movie…

How are you ever going to be happy if you keep wallowing? Listen, when I was a little girl I used to spend hours looking for ladybugs. Finally, I’d just give up and fall asleep in the grass. When I woke up, they were crawling all over me.

basically, good things will come to those who wait. it took me years to figure out what my mom was trying to tell me. it only gains more meaning the older i get. our home is littered with ladybug-laden everything. 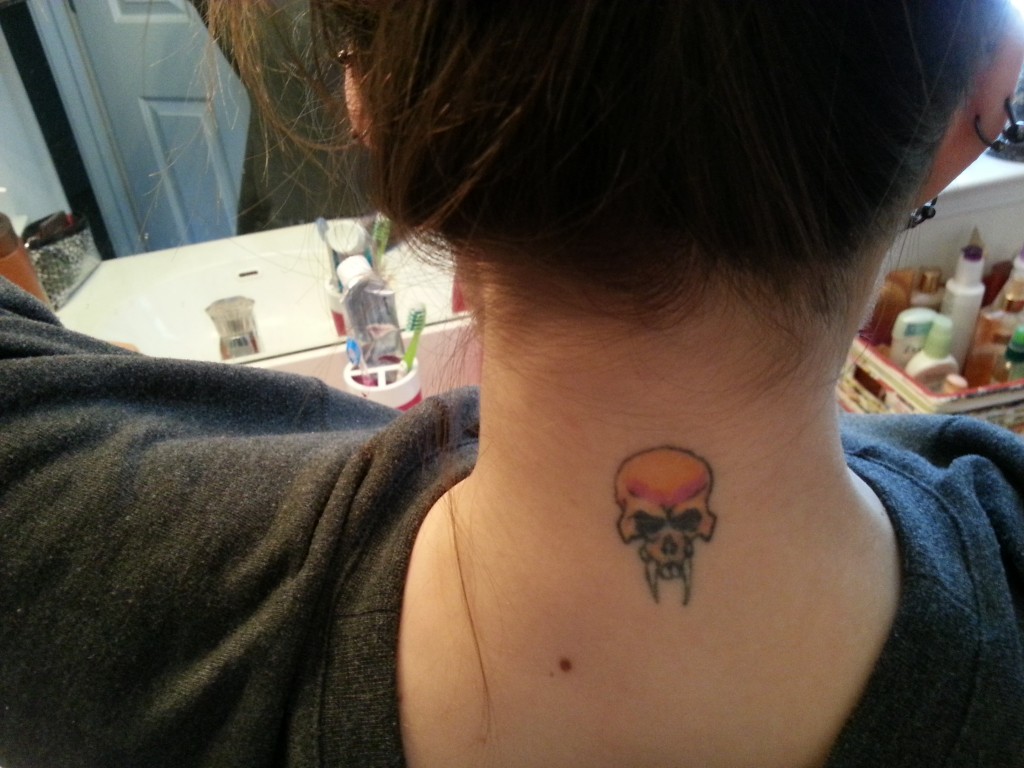 when i got my skull tattoo, it was almost on a whim, but that doesn’t discount the meaning. the day before i left for europe back in 2007, i was hanging out at home in NC, visiting old friends. my ex from high school, brian, was finally not working, so we could go hang out. he had just gotten in a horrible motorcycle accident, about wrapped his bike around a tree, and could’ve very easily died. he was incredibly lucky, and he walked away from the wreck, but had severe damage to his arm/wrist/hand. having survived a near-death experience, we made a deal to go get tattoos together that evening. we drove out to a house in podunk. we were out in advance/mocksville–definitely off the grid. a friend of his did tattoos out of his house, so his buddy drew it up, and that was that.

today? today’s ink was on another level. 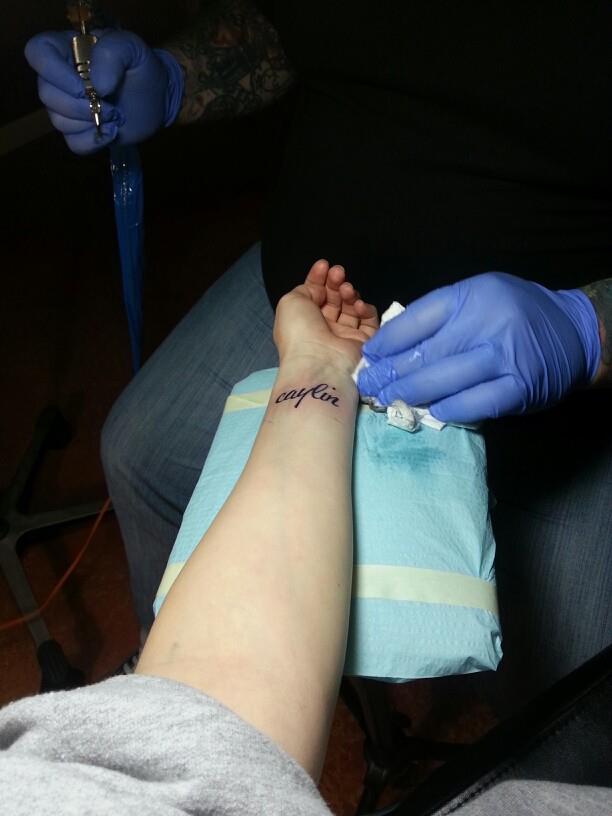 i knew i wanted caylin’s name, but all that stood in my way was the font choice. i finally decided on voluptate, after weeding through hundreds. i called the tattoo shop today to make an appointment. brett and i had already made plans to take half-days from work. tattoo or no tattoo, we wanted to have an afternoon to go do something together.

i got there a little early and the girl at the desk was awesome, as was my artist. as it turns out, he used to OWN the tattoo shop that i spoke about earlier (the one in boone). such a small world. i had a lot of piercings done there, and it brought back memories. that sealed the deal for me. that was my sign. how awesome is that? i was done in less than 30 minutes, and we were out of there.

i absolutely love it, and i hope caylin does, too, one day. that babygirl has changed my life.

This Is Happening, Dammit

i’m sick of feeling like shit lately. i’ve been working…