like i said, the second night, i prepared for the worst. we got back from the bar, and i got ready for the arctic. the hab was a little warmer when we got there, but not by much. i put on sweatpants, socks, and my hoodie. texted brett to let him know we were back in one piece. fell asleep as soon as my head hit the pillow.

evidently, the heat takes a little while to kick in, but when it does… it is no joke. i woke up 3 hours later because i was practically bathing in my own sweat. started shedding layers, trying to be quiet, kicking half of my crap off the bed in the process.

i got up and showered. packed all my stuff up. my clothes multiplied while i was there–trying to cram a hoodie and sweatpants and more shirts into my already overpacked bag (because this idiot packed 6 pairs of pants for some dumb reason) was super fun. i was sweating again.

then, i remembered our bedding. in the midst of fighting with my duffel bag, i had forgotten that we needed to toss our sheets and blankets in the laundry. which meant stuffing all my sheets and the ginormous blue blanket into my tiny pillowcase. more sweating. 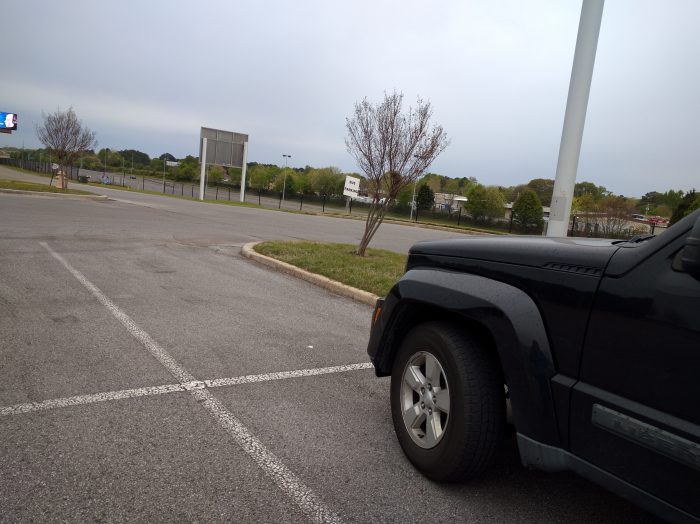 that is my car. that is my car a half a mile from the hab. i left the hab at 7:15, and realized that i definitely could not carry my crap around the rest of the day, and needed to put all my crap in said car.

we were supposed to all meet in the cafeteria at 7:30. again, car is half a mile away. i decided to make a run for it. my bag easily weighed ~25-30 pounds at this point. it would’ve been fine if the strap was comfortable (or if i had been smart and packed for 3 days instead of 15), but instead it was cutting off my circulation, hanging awkwardly, and crushing my chest. awesome.

then it started raining. even more awesome.

just picture me in my flight suit and space backpack, with a giant duffle bag strapped to me and a purse on one side, hobbling through the rain as fast as i can.

i am so good at being a hot mess it is just astounding.

got to my car, sweating profusely and also more rain. KEEPS GETTING BETTER. gonna look great for graduation.

i drove back over to the campus and parked near the hab. not sure why i chose to park there, because i needed to go to the cafeteria, not the hab. had to walk around to the admin office to get in. all things considered, at least i didn’t have to walk another half mile. but… it was farther than i had hoped. again, i’m an idiot. walked to the admin office and got to the cafeteria, realized i left my phone in the car. BACK TO THE CAR. are you kidding me. got my phone. i definitely got my exercise in that morning.

when i got there, the line was just insane. got my coffee and sat with the team while it died down a little bit. then we got breakfast. banana, STAR SHAPED HASH BROWNS, scrambled eggs, orange juice. 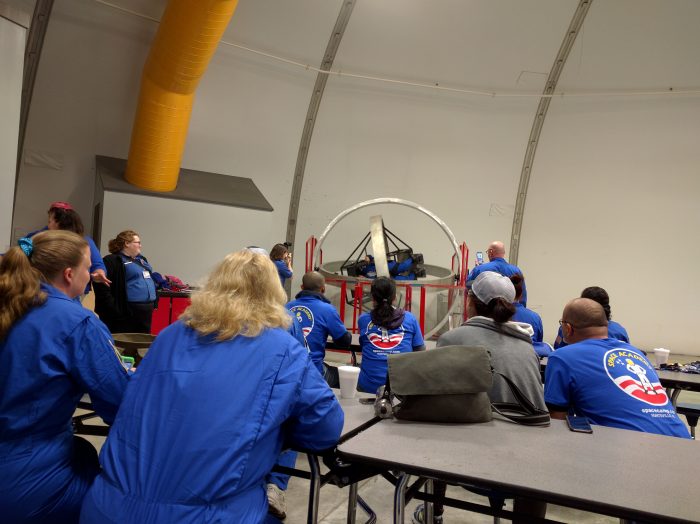 after breakfast, we were scheduled to try out the multi-axis trainer. AKA, the MAT. wikipedia says, “Simulates disorientation, similar to the Multiple Axis Space Test Inertia Facility (MASTIF) developed for Project Mercury”. john told us that as well when someone asked what it was supposed to simulate. “it’s supposed to simulate all that, but it totally doesn’t and it’s totally fun.” fair enough. almost everyone wanted in.

i surprised myself and opted out. 1) we had just eaten. 2) i get motion sickness a LOT easier these days, not sure where that is coming from. 3) it’s one of the few things i actually remember doing at my last space camp visit. 4) i knew i would get a headache and a headache during an 8 hour drive was just not on my list of fun things to do that day.

after the MAT, we were off to launch our rockets. our super duper elmers glue had been left to dry overnight, so we were ready. 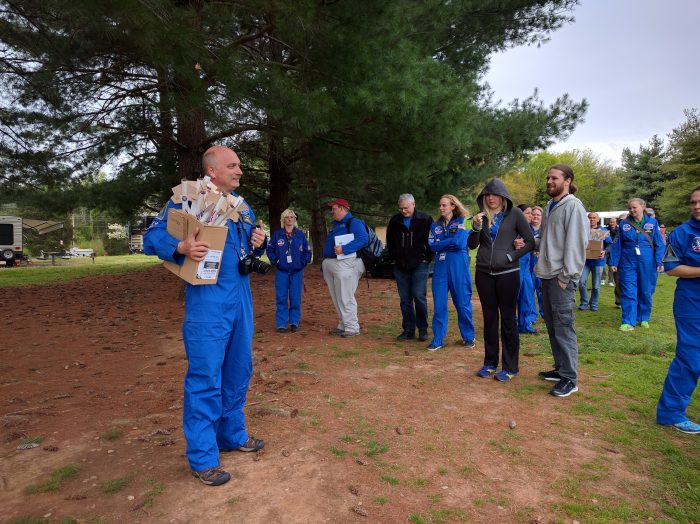 box of rockets
the rocket launch site was the open field past the marriot. highway on one side, hotel on the other. i mean, what could go wrong? there were several trees in the area, all of them absolutely covered in tiny orange and white checkered parachutes from launches passed. john–“it’s the space camp hall of fame!” 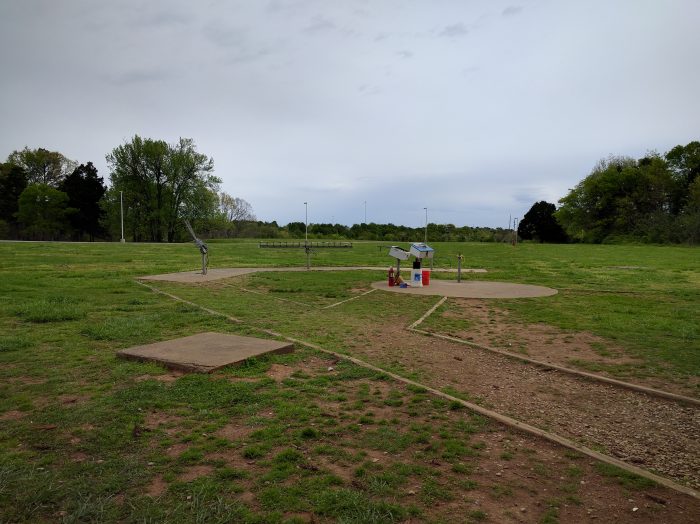 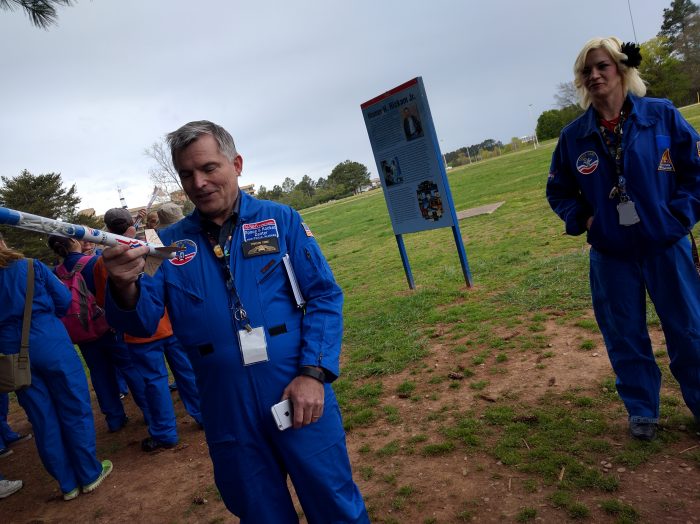 we lined up all our rockets. our team decided we wanted to shoot them all off at the same time. our team joked often about, “go big or go home”. final jeopardy? wager EVERYTHING. close down the bar? screw that, we’re closing down 2 bars. rockets? BLOW IT ALL UP. 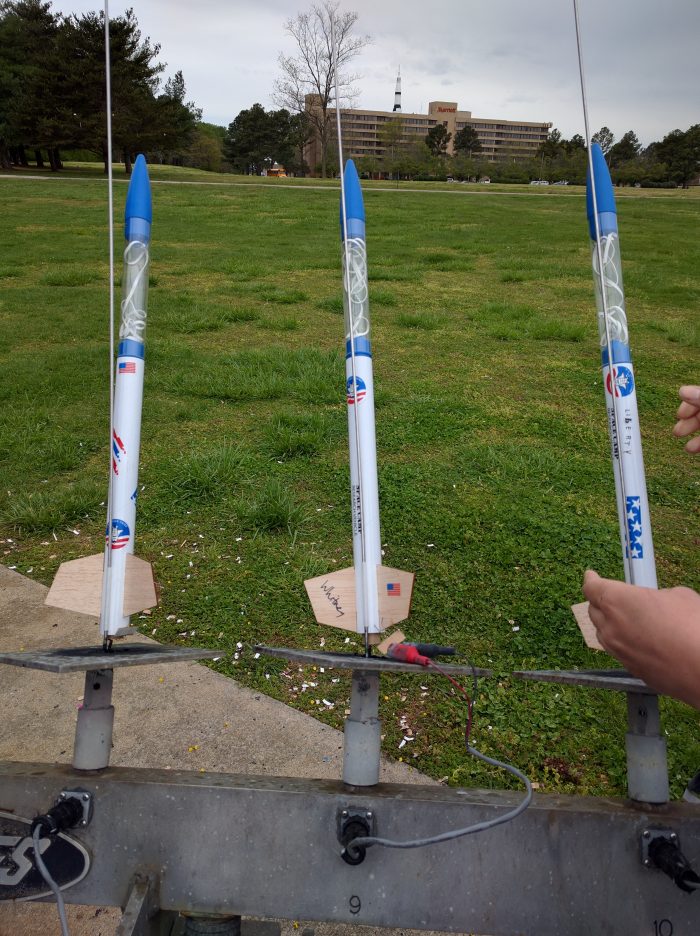 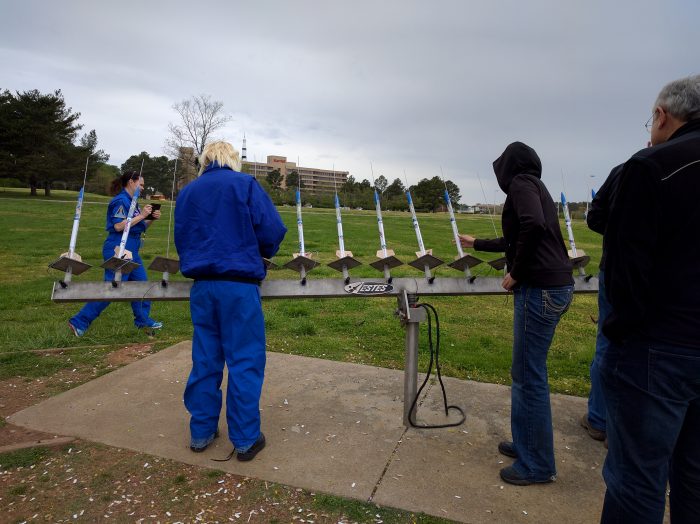 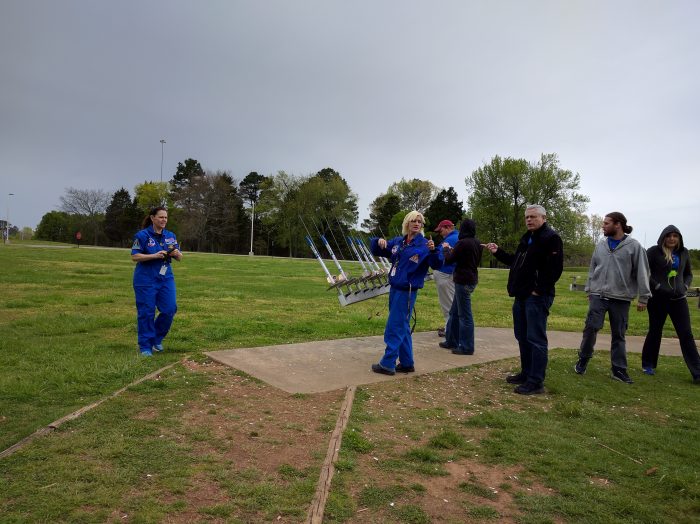 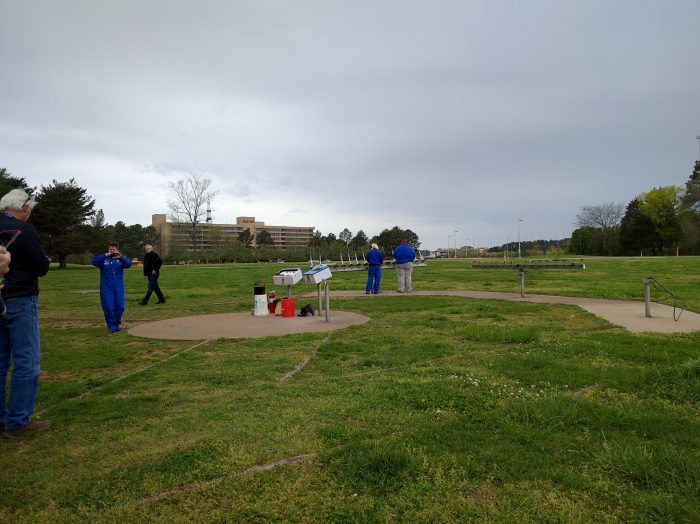 here is the video of our launch.

after the launch, we all ran to rescue our rockets. and by ran, i mean most of us meandered in that general direction, while leslie and ronnie made a mad dash to collect them all and see who could get the most. and in doing so, they tangled ALL of them together. so we all stood around for half an hour after while they made group efforts to untangle them all. 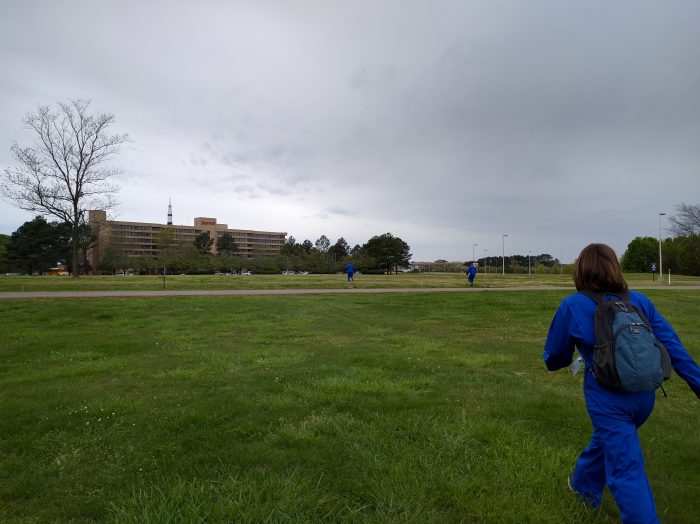 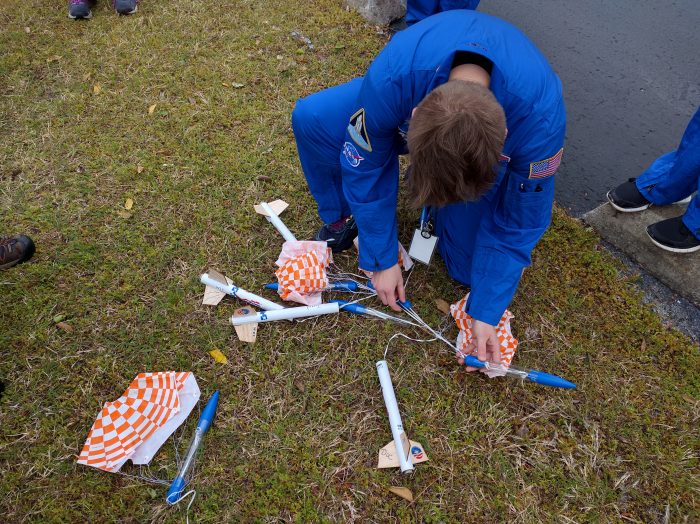 when it was all said and done, the other team finished their launches, and we all filed back onto the bus. and thank god the bus was warm, because between the rain and the wind, we were a liiittle bit cold.

next stop was the gift shop–just about everyone wanted to stock up on souvenirs to bring home for the kiddos. i made sure to grab some freeze dried ice cream, a couple shirts, and silly putty for caylin. 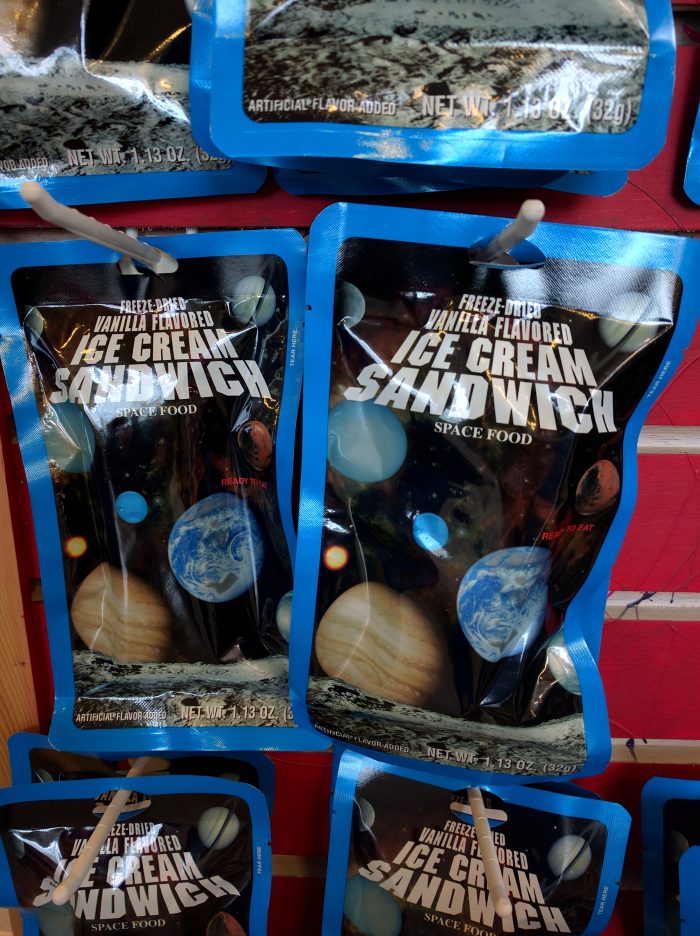 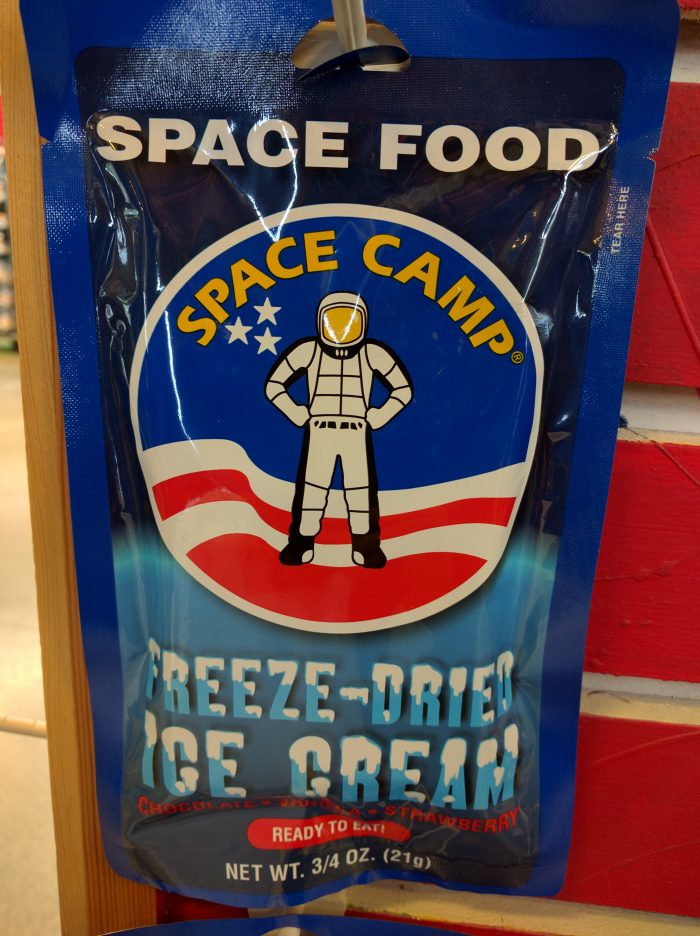 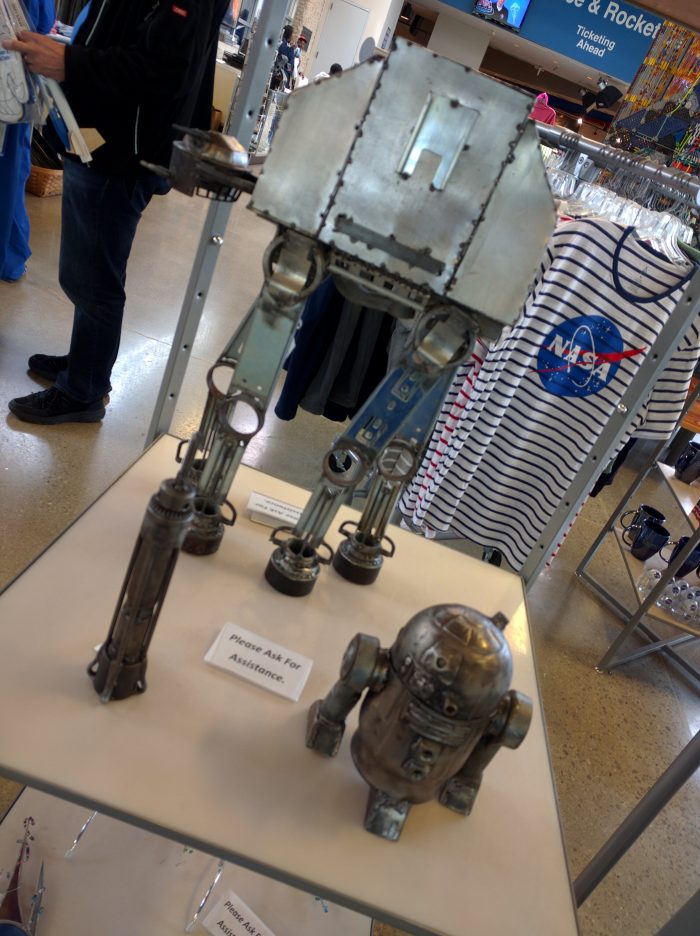 while we waited for everyone to get done checking out, i wandered down the hallway and found the robotics lab. pretty awesome. it was closed up so we couldn’t go in, unfortunately. 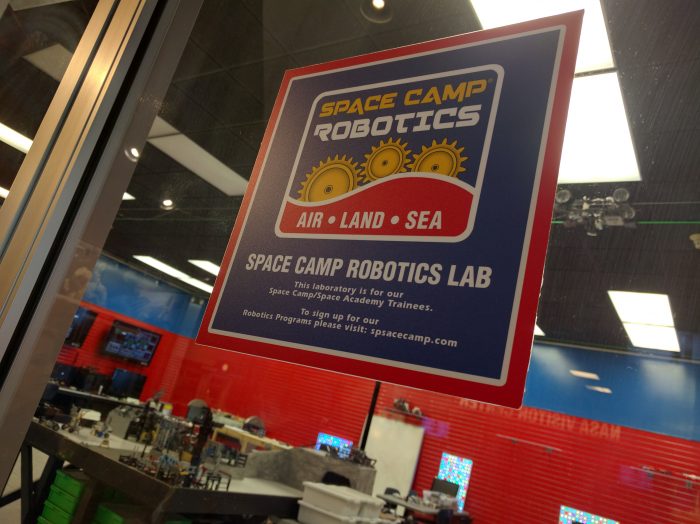 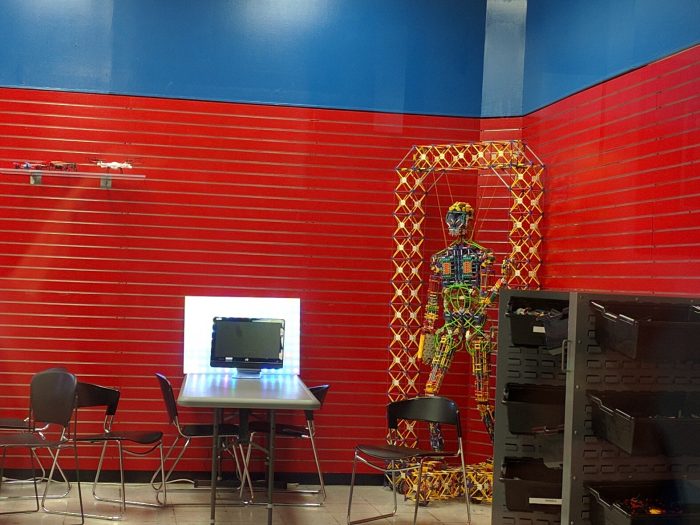 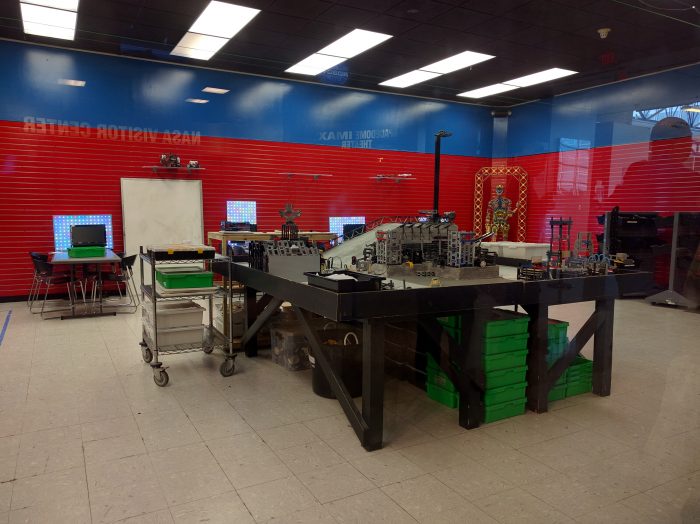 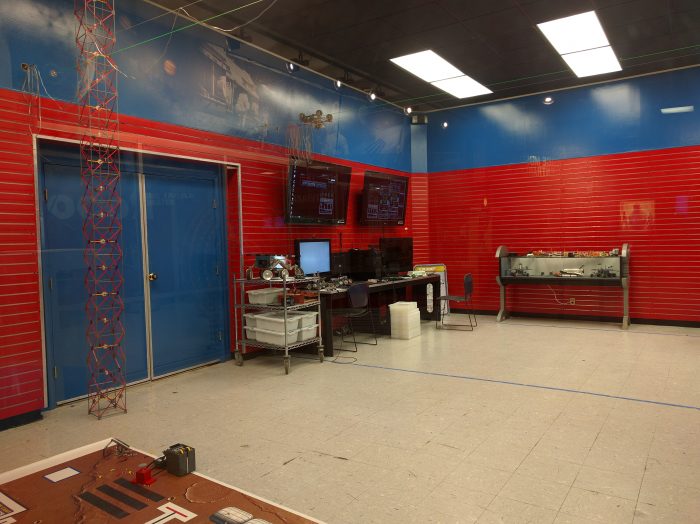 everyone finished up shopping, and we walked to the building where our graduation would be held. it ended up being the same conference room where we had orientation–seemed fitting. we had to get lined up outside in the hall, so it felt like college graduation all over again, all huddled together in a hallway waiting for the music to start. 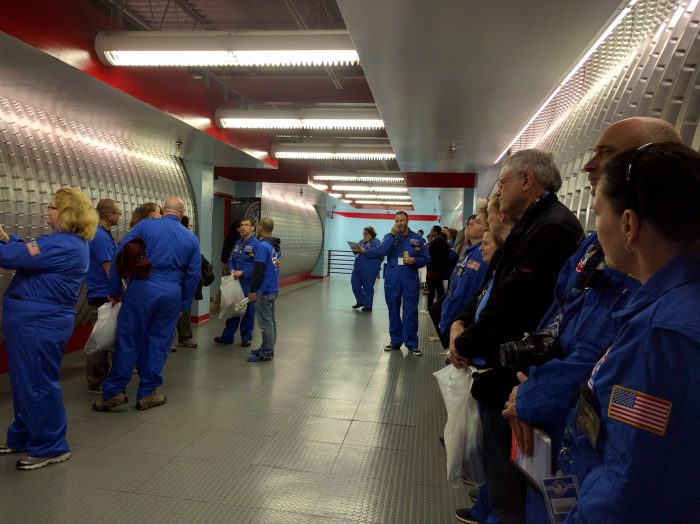 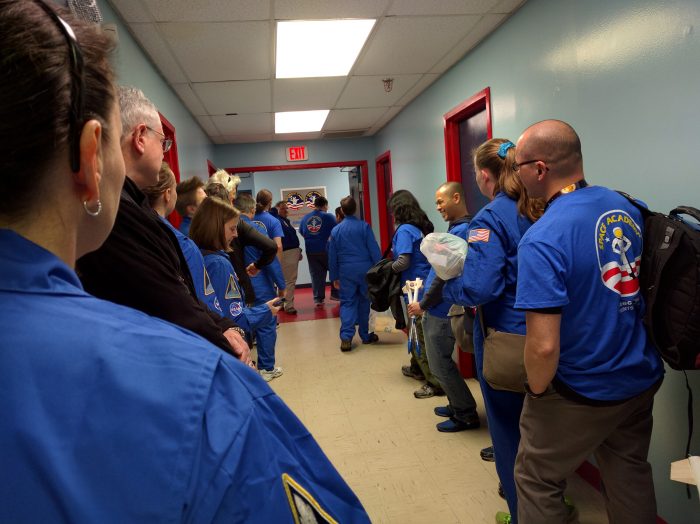 they finally told us to go in. each team sat in their own row. since it’s adult space camp, we didn’t exactly have an audience, so it was strange having a ceremony with just us. the woman performing our graduation was actually dr. deborah barnhart, CEO of space camp.

funny part was, the speeches aren’t really tailored to each group. at least hers isn’t, so it was geared more towards growing minds and exciting science/technology career plans for the future. space camp is typically a much younger crowd. everyone kind of laughed when it started to get motivational and a handful of folks from the group were like, uh, we’re about to retire. most of us are already set in our career fields, but it was still a really nice speech. ANYWAY. she wrapped up, and our teams took the stand.

one team at a time walked up and lined up across the stage. we were the second team to go up. we were in alphabetical order by last name, so i was first in line. we all made sure our badges were slightly off center so when dr. barnhart walked up to flip it over, she could yank it off without fighting with the velcro (it is some seriously sturdy velcro). each team’s leader had a speech prepared, so these were actually pretty good. john’s was hilarious, and i wish i had video of it because it was epic. loud, booming, highly exaggerated southern/alabama twang, with plenty of team inside jokes, and smartass comments. that man is fantastic.

john started calling off our names and mission roles, “whitney champion, mission specialist”, OH SNAP. dr. barnhart yanked my badge off, flipped it over, handed me my papers, then proceeded to give me the hardest handshake i think i’ve ever had. dr. barhnart does not mess around. our team finished up and sat down, and then the last team went.

after the teams were done, we had awards. there were 3 awards, and 3 teams. so… we knew everyone was getting something. we got the “commander’s cup” award. according to the internets, since i can’t remember the specifics of the award, “The Commander’s Cup is awarded to the team who accumulates the most points in graded events: mission patch, mission, mars/lunar mission, and space bowl.” so, our team is badass, basically. 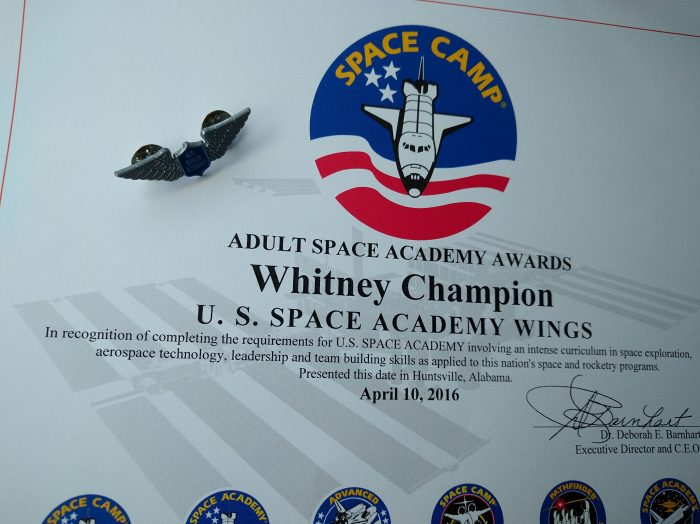 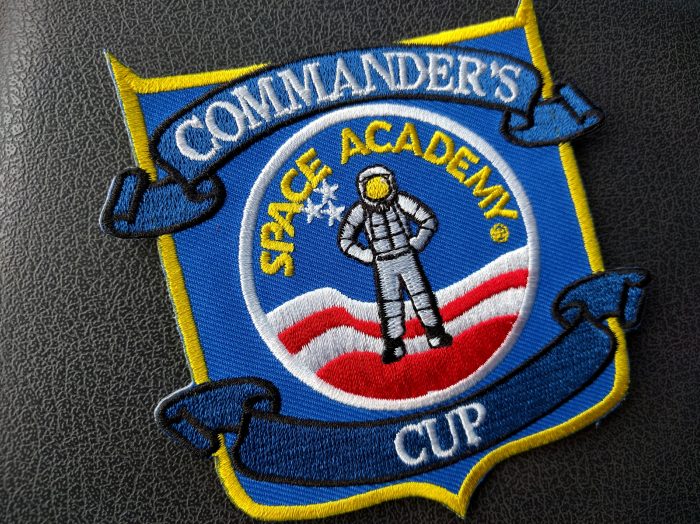 everyone was eager to get back. that much was obvious. we had SO much fun, and i miss my space camp team, but we were definitely ready. it was almost noon at this point, several folks had flights to catch, and i needed to get on the road in my semi-functional car for the 8 hour drive back.

brief goodbye hugs and handshakes, and i hauled ass out of there. i immediately got in the car and put my sweatpants on. i may or may not have worn them every night since i got back. 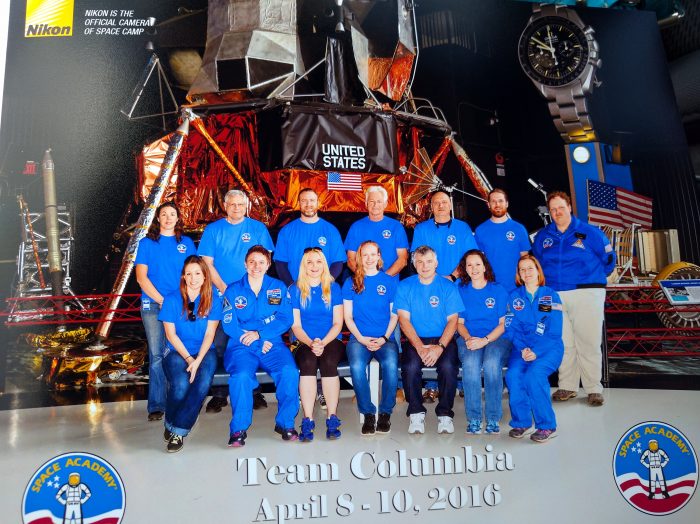 adult space camp is epic, my friends. if you have the chance, absolutely do it. your inner nerd will metaphorically crap its pants. i can’t wait to go back again one day. :)

This Year So Far In Review?

not only have i slacked on caylin posts, since i haven’t…

a couple weeks ago i went to a workshop/training event, and…