i have been procrastinating for 2 days to write this entry. it usually doesn’t take this much convincing, but i feel like so much has happened in the past month that writing about it will hardly do it any justice.

for starters, let me just say that CAYLIN. IS. WALKING.

for all you people without kids, that probably doesn’t seem like a big deal.

for all you people with kids, you may not even remember how much of a big deal it was when it first happened. it almost seems foreign even thinking about when she first sat up on her own.

for all you new parents (like us), you may be feeling the same thing i’m feeling right now: “who is this tiny human wandering through my house now?”

i feel like she was a slug for so long.

and then she started crawling, but she was still hugely dependent upon us to get her from point A to point B without throwing herself into something sharp, or face-planting on the linoleum.

and now, she is miss independent. aside from the fact that she still refuses to hold her own bottle, and absolutely will not use a sippy cup. i figure it will happen eventually. why worry about it in the grand scheme of things?

because for THE LOVE OF GOD SHE IS WALKING!

the only word she has down pat is “NO”, which is almost always accompanied by a very firm head shake and a wave of her little hand, like “no WAY am i doing whatever it is you want me to do right now! i have places to be!”

she also does this a lot. hamming it up for whoever’s watching. especially at restaurants. she knows. SHE KNOWS exactly what she’s doing.

for the last month, basically, all she wanted to do was walk. we had to help her up until a week ago, but that is ALL we did. we would get home from work, and while i cooked, brett walked her around the driveway/sidewalk/neighborhood/living room/stairs/etc. while he worked out, i took over. 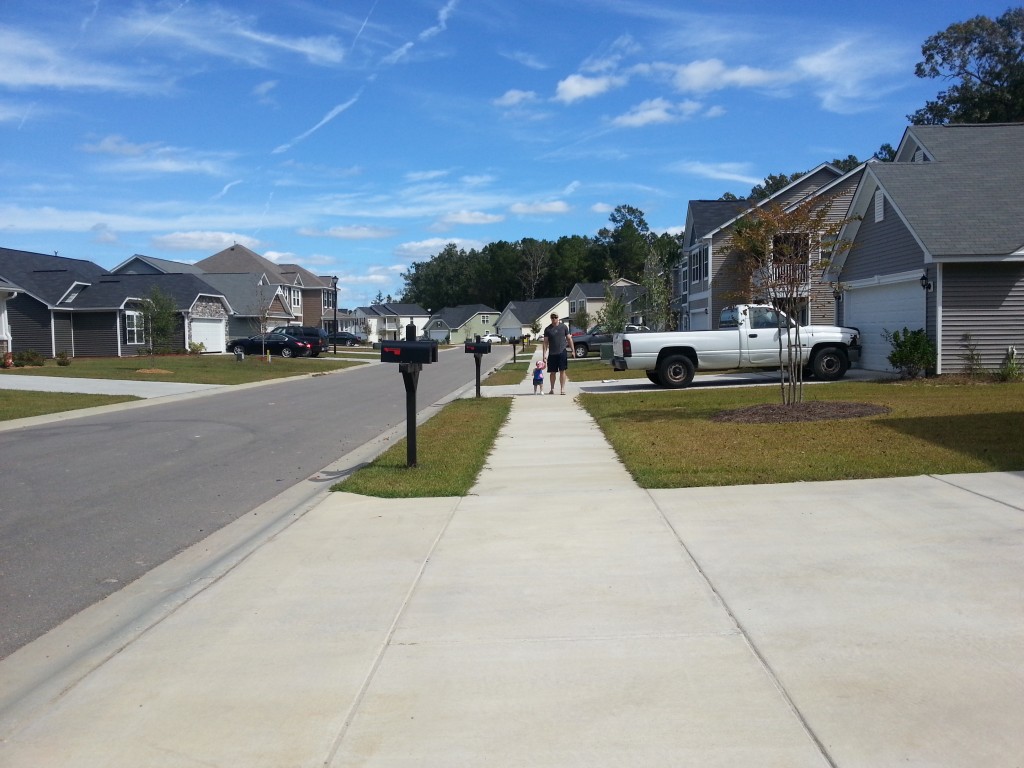 if you pick her up while she is trying to walk somewhere, you would think someone was trying to kill her. INSTANT tears. screaming bloody murder. it’s unbelievable.

yesterday, we were playing in the yard, and she found a rock. a big white rock. she figured out that if she threw it on the pavement, it made a sound. so that’s what she did for like 15 minutes. pick it up, throw it. step on it. waddle around. pick it up, throw it somewhere else. move it here. move it there. i tried to relocate her so she wasn’t in the neighbors’ driveway, and had to basically play fetch with her so she would chase after the rock, instead of having her pitch a fit thinking i was taking the rock away from her.

IT’S A ROCK. but she loves it. 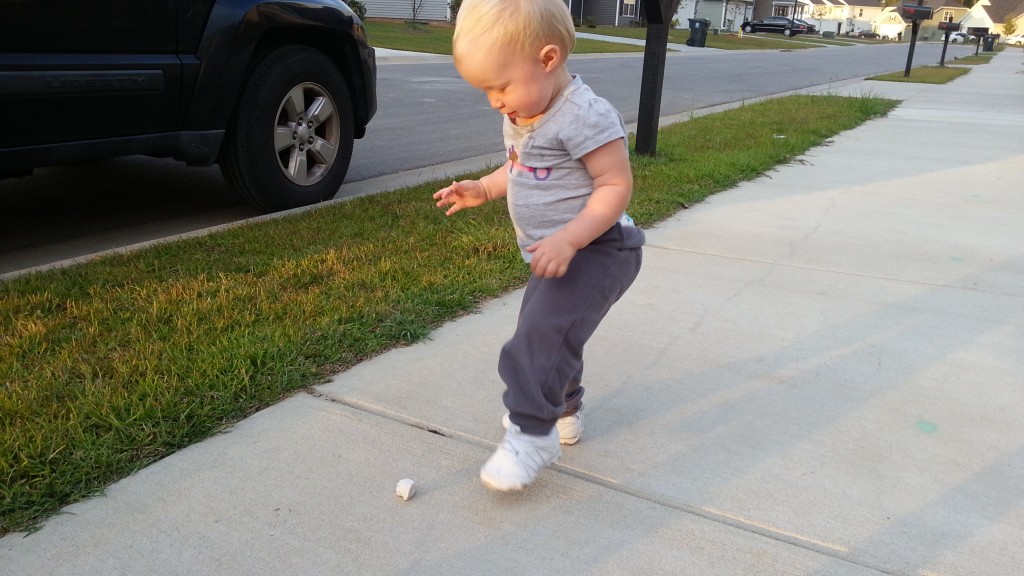 this morning while brett was getting ready for work, she and i walked around the yard and collected leaves. she also tried to collect a cigarette but luckily i talked her out of that one.

everyone told me that once she went mobile, it would be downhill. everyone said how exhausting it would be. how much trouble i’m in now. i guess that hasn’t hit yet.

can i just say, that it seems so much EASIER now? i know it’s only been a week, but it feels like a load has been lifted. literally and figuratively.

i can put her down, and she’s off. there isn’t much laying around in our house that she can get into, and we can see her pretty much anywhere.

i can cook now. WITH BOTH ARMS. she can do her own thing now. she is a walking, babbling, self-feeding human. i consider that a parenting success.

i have to admit, it is bittersweet. i still miss cuddling her when she wakes up in the middle of the night. it doesn’t happen a lot lately, and when it does, i carry her downstairs, sit her on the counter, give her a snack and a few sips of formula, and tuck her back in. 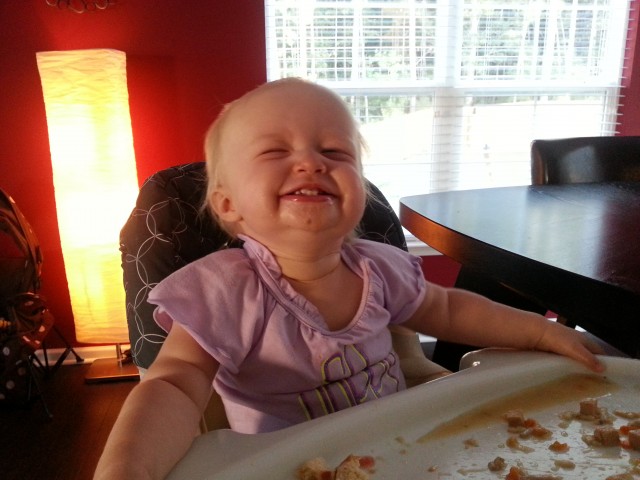 she isn’t a little baby anymore. she’s turning into a little person and i barely remember what it was like to be able to hold her in one arm. i DO, however, remember the day we brought her home from the hospital. sitting on the couch with caylin in my arms, my dad directly across from me with the video camera recording. it was so surreal. i can’t imagine HIS thoughts. 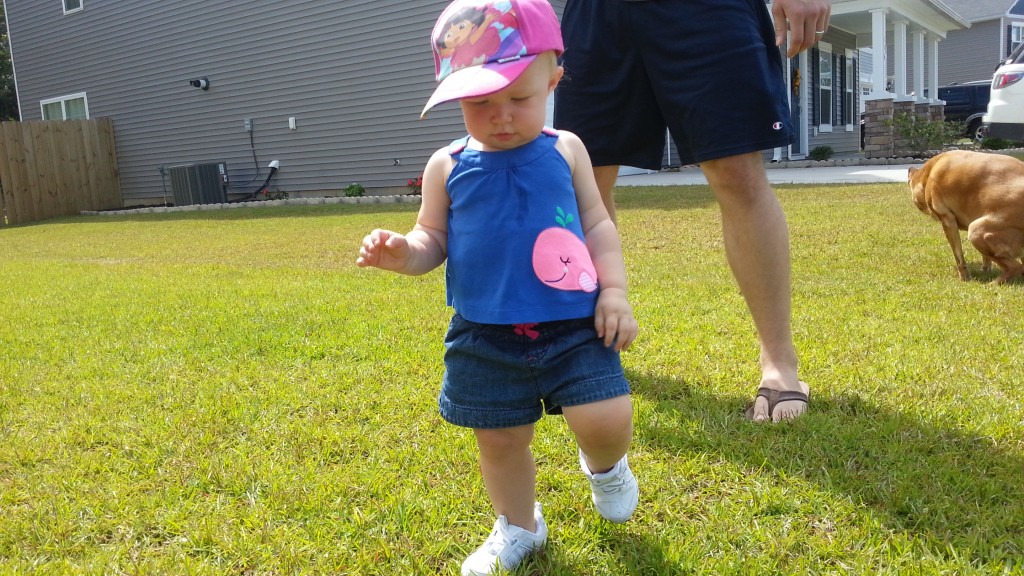 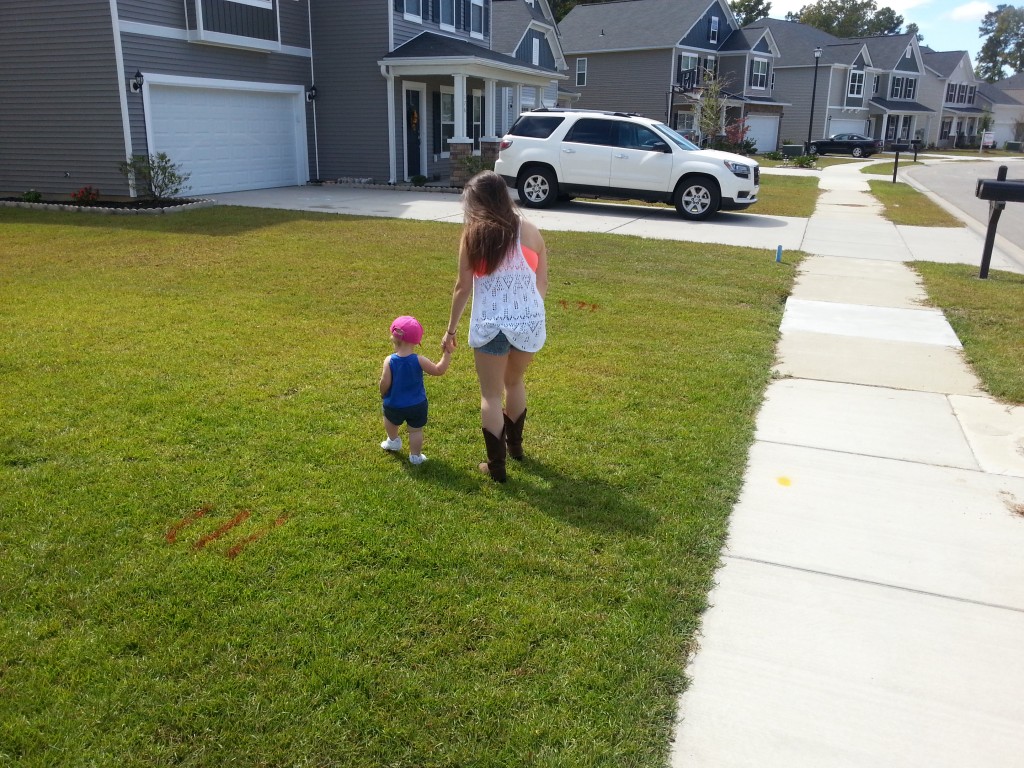 segue into a semi-related subject…

it’s hard not to be happy these days. i find myself smiling for no reason. i smile while i work out. i smile all day at work. i smile watching her play. i smile when i come downstairs after putting her to bed, after i’m done working out, when i finally get to hang out with brett.

sleep? doesn’t matter. i could get 4 hours, or 10 hours. it’s almost as if my body is blissfully unaware of its needs lately. am i exhausted? yes. but, somehow, that doesn’t matter.

i am beyond stoked for what’s to come. it just keeps getting better.

i feel like i’m back on the rollercoaster again. same one…