another 3 weeks have gone by and i’ve completely neglected writing about it. ugh.

there are probably 50 more things i could put on this list but i’m so tired and can’t think of things right now.

last week and the week before, we think caylin was hitting her 3 month growth spurt. waking up 2x every night to eat (usually she sleeps through the night), and she was really squirmy/fussy like she could never quite get comfortable. so i didn’t get a lot of down time, and wasn’t able to zumba hardly at all.

i did zumba yesterday, but took a break from it today so i could get out of the house. i went for a run outside. i can count the number of times i’ve done that on my 2 hands. i don’t know what came over me. i took loki, and it was really refreshing. only a mile and a half, but it was nice. i don’t think loki thought so, though. about 1/3 of the way through, her shoulder started bothering her again. it’s bothered her her whole life after my ex dropped her when she was a pup. i hate it for her and bought this powder from the vet that i sprinkle on her food that’s supposed to help, but it never did much, that i could tell. time to find something new. i hate to put her on more medication, though. prednisone was the only other thing that seemed like it helped, but is that safe to use long-term? i need to ask. i feel like 1 pill a day sucks bad enough. and i don’t even know if that one is doing anything, either. all i know is that her tumor is still in the same place. fingers crossed (still) that it won’t venture off. 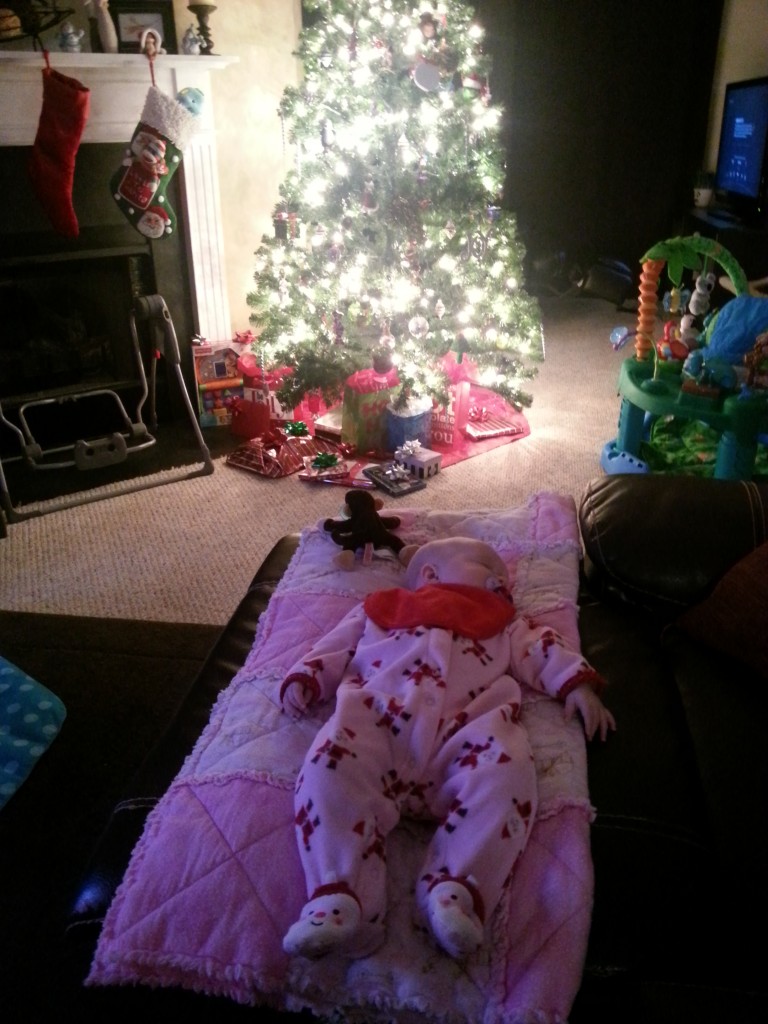 everything is ready for christmas around here. brett and i are off work for the week. stockings are hung, including caylin’s this year! presents are wrapped under the tree, though he and i already exchanged our big gifts for each other. i told him that all i want for christmas, period, is a massage. this is not one of those situations where men think women say they don’t want anything, but then get pissed off when they really don’t get anything. NO. i am not like that. i JUST wanted a massage. i need nothing. i have everything i’ve ever wanted in my life to the point where it’s scary and sickening. we are unbelievably blessed with the lives we have. plus, we have so much STUFF that we don’t even know what to do with half of the STUFF in this house. especially since caylin was born.

he got me the massage. i was thrilled. i go on wednesday. i really hope it makes my back feel better. but the other day he came home and gave me another spur-of-the-moment gift (he shouldn’t be allowed in best buy around christmas time). i knew already i wanted to smack him for buying me something that i know i don’t need. he even got my mom to wrap it all nice and perfect like she always does (i envy her present wrapping skills). i opened it after we ate dinner. it was a freaking ipad 2. 2 years ago, he bought me the galaxy tab. no one on this planet needs 2 tablets and a smartphone. i didn’t know whether to punch him or cry first. crying won out, however. it had been a while, and i couldn’t believe he went and did that for me. he is far too good to me/us as it is. however, i absolutely love it. i already found a game i like (which i just realized is also on android but i have been so far out of the nerd loop since caylin that i didn’t notice), machination. plus, i had no idea you get free instant video from amazon prime (see how far out of the nerd loop i am?), so that plus showtime anytime is pretty much fantastic. caylin just inherited a galaxy tab for when she’s a little older.

we’re doing christmas here this year, so my dad and christine are getting here tomorrow. my mom got back from picking up my grandparents today. she brought them down from NC. brett’s parents are coming next weekend. we’re extremely lucky that so much family will be able to visit us. christine is bringing a lasagna, i’m making a salad, and we’re all gonna cram into our place for a nice, albeit cozy, christmas dinner.

which reminds me, i need to buy stuff for salad. and more wine. probably need chocolate, right? what is christmas without christmas candy? my mom would be ashamed. she did not raise me like this. for the first time in a long time, there is no candy in this house. maybe i’ll even get champagne. i even went to target today. talk about baby brain, lately. my mind is out the window. i don’t know how other parents who don’t have a quiet, easy baby do it. i get 7+ hours of sleep a night, and am still exhausted from entertaining a 3 month old all day. well, on non-work days. work days i’m exhausted from work and entertaining a 3 month old until she goes to bed. but still. since the TV is in the living room (our whole downstairs is wide open, you can’t avoid it), i do everything i can to keep her entertained and NOT watching it. i am simply braindead. 1-2 glasses of wine are my BFFs lately in the evenings.

once again, no coherence to my writing. happy holidays, everyone. i hope santa is good to you all this year!

at least not yet. brett has been out on travel since monday,…