i am so pissed. we spent all of last weekend in boone with so many of my favorite people, and after all that, i took 2 pictures. one of cheap donuts. the other of beer. beer that i couldn’t even drink. this pregnancy is hijacking my brain. on a totally related note, while we were driving up, i missed both highway exits (this is not the first time that’s happened) and almost got on the wrong on ramp.

last weekend was the ASU gaming club’s last AppalachLAN of the semester. for those of you who haven’t known me for a while, i was an active member of the gaming club through most of college. whether it was attending the LANs, helping market them, or being the VP of the club. those were, without a doubt, some of the best times i ever had. so they had a “reunion tour” for us “old folks” who hadn’t been able to go to one in a while, and we had a surprisingly good alumni turnout. members of both gaming club and the old tech. support crew (where i worked all through college) made appearances. unfortunately, brett and i were MIA for most of the LAN. not complaining, though, as any excuse to run around boone with him is fine by me. 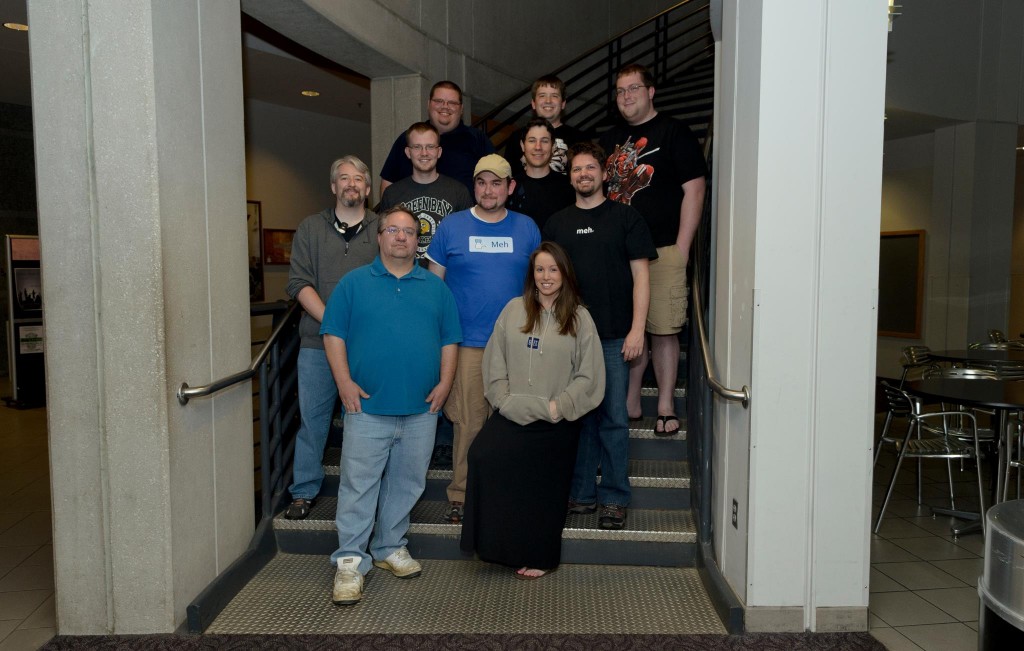 part of the gang back together again
despite the fact that it was a LAN party, i decided to go sans computer this time. not only did i need a mental break from the damned computer, but i’ve been having some serious rib pain/burning going on the last few weeks. long periods of sitting down make it hurt much worse. after i eat, it’s intensified x2. and when i lean back in my chair to alleviate the rib pain or stand up for too long, my back pain comes back. the only time i’m comfy is when i’m lying flat on my back or walking/moving around, and extra strength tylenol does absolutely nothing, so that’s what brett and i did for most of the LAN. we popped in every so often to say hi to everyone and then we’d disappear with danielle (she and paul, her husband, came up with us) to walk around boone and get our macado’s fix. the exercise was nice and the weather was beautiful.

every night was spent playing trivial pursuit and drinking back at the cabin. they drank. i watched. after almost 6 months of this, i no longer have any feelings of jealousy about being left out of the party. it reminds me of my pre-college days when i was 100% anti-alcohol, and more than happy to be entertained by drunk friends. like brett talking about lemurs being part of the fur trade. trivial pursuit paves the way for awesome conversations, whether you play it the way you’re supposed to or not.

on the subject of baby news, i’ve given up hope on buying maternity clothes just yet because the target and kohl’s around here have sucky selections (talk about FUGLY), and i refuse to pay full price for any clothing ever. so i’ve resorted to buying weird baggy shirts/sweaters/skirts and making myself feel better about it by buying delicious BUT diet ice cream sandwiches. pregnancy is not an excuse to eat more. i don’t understand why some women think they are eating for two, and then wonder why they can’t ever get rid of the baby weight. i’ve been eating better food more often (trying to, at least, which is what i should be doing every day regardless of being knocked up), milk and OJ, no caffeine (an occasional coke every couple weeks), and vitamins. and the aforementioned ice cream.

i’m finally showing, but most people still don’t know i’m pregnant at first glance. lucky for me, my chest sticks out far enough to compensate for any kind of bump and a baggy shirt shows nothing at all until the wind blows. so instead, i just feel self conscious, because unknowing people probably think i just drink too much beer. this middle stage is driving me crazy. i’m 24 weeks pregnant and i haven’t even gained 10 pounds, but when you’re 4’11” even that much makes a difference. 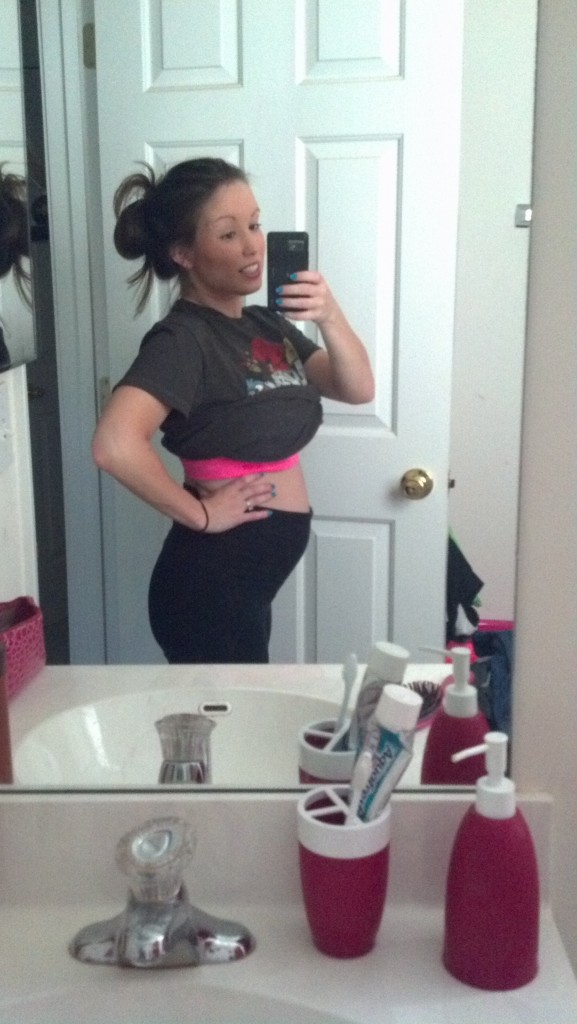 suffice to say, i can’t wait to have this baby out of me. and a shot of whiskey.

happy cinco de mayo and derby day. i may not be celebrating with a margarita, but we WILL be mexican-ing it up tonight with friends. :)

Not My Cup of Tea

Palladia Day 2, And My Ribs Hurt

loki had her second dose of palladia today. still no side effects!…