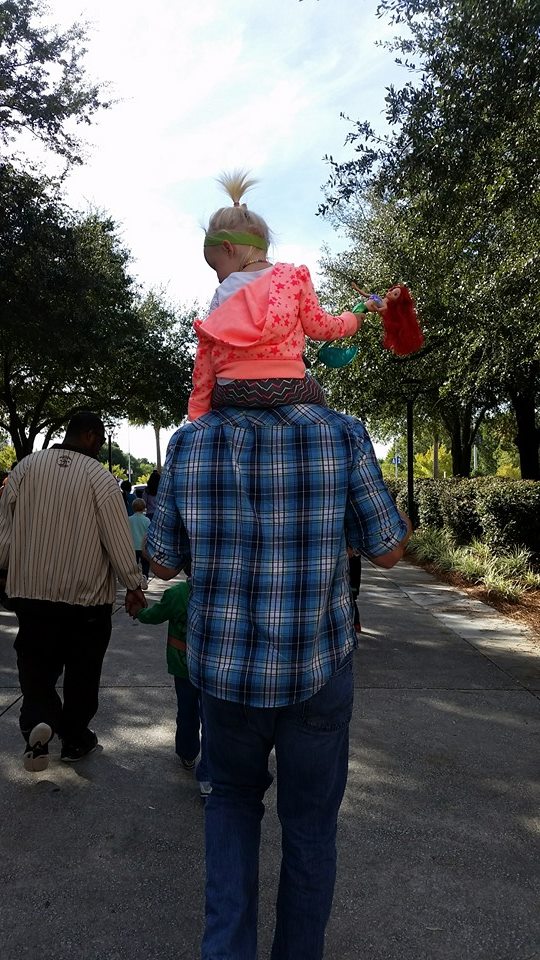 caylin went to disney world this summer while brett and i were in vegas. my mom took her. i’ve literally lost count of how many times my mom and i went to disney while i was growing up, and now she’s passing it along to my kid.

quite honestly, if it weren’t for DEF CON, i’d pick disney over vegas any day. but that is neither here nor there.

not including the part where we just took her to her first disney on ice. let me tell you–i was worried. my mom and i have gone just about every single year since i was old enough to attend, or whenever they started disney on ice. whichever came first. it feels like forever.

aside: there are so many things that my mom exposed me to that i’m thankful for. musicals, craft shows, music festivals, theater, a VERY wide range of music in general, movies i never would have watched. it makes you appreciate that kind of talent–it’s incredible. i wish i had that kind of talent. but at the top of that list are disney on ice, and every musical we’ve ever been to. mostly because of the nostalgia attached.

anywho, we’ve been going for decades. literally. jesus, i feel old now. i’ve been hit with plastic blinky wands. i’ve eaten all the dippin dots. the popcorn. last year we even had beer, since brett came with us. i’ve witnessed the screaming children, and the children who were too young to be there, and the almost-too-old-preteens (pfft, something’s wrong with those kids, disney is amazing).

basically, i was skeptical about bringing caylin this time. she can barely sit through 20 minutes of a movie without a truckload of food in front of her, even if that movie is cinderella. which is fine at home–i’d rather her be doing something constructive than planted in front of the TV. she has SO much energy. but i didn’t want to be THAT FAMILY who had to step out because of a child throwing a tantrum. disney aint cheap, and we aint steppin out. i bought the tickets anyway.

we were probably 10 rows from the ice. caylin has seen… a buttload of disney movies at this point. and since she went to disney world, she knows like… every character. so i had high hopes that disney on ice would be like IN YOUR FACE AMAZING.

AND BOY WAS I EVER RIGHT.

thank god. she was hooked. bucket of popcorn, mickey mouse, lots of pretty dresses and bright lights, loud noises. i caved and bought her a little mermaid doll (it was $20 (double parenthesis fail, but $20 is “cheap” for disney on ice toys)). i think she was mostly overwhelmed and in shock for the first half (stunned silence), but by the second half she was getting excited and laughing and clapping and, let me just say…

i know i’ve grown up to be a giant pain in the ass, and a bitch most of the time, but my touchy feely wuss side hasn’t changed a bit. the side that wants to cry tears of joy in these situations. my face might have said FUCK OFF (trying to dodge a flying little mermaid doll for an hour is frustrating and dangerous), but my heart was melting. i was wiping tears away when “can you feel the love tonight” played, no joke.

my mom sat on my right, my crazy child sat in my lap, brett to my left (mostly just staring at hot ice skaters and scarfing down popcorn, can’t blame him for that). i thought disney on ice couldn’t get any better, since it was always so much fun going with my mom over the years. but this was hands down, the best.

thank you, mom, for giving caylin everything you gave me and then some. next year will be even better.

26 Months, Everything is Mine, I've Seen Cinderella 3253 Times

this month, caylin has constantly sounded like the seagulls from finding nemo.…